What a Bott They Got 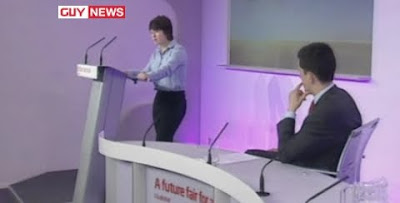 Tory activists have been left spitting blood after the defection of the delectably named Anastasia Beaumont-Bott, the former head of the Tories LGBT movement. She claims that since Grayling's comments she has suddenly seen the Labour light, no ifs, no buts, and shared a press conference platform with David Miliband this week. If she was ever a Tory surely it was about more than gay rights? The backside of this story is a little murkier though...

Along with photos, in no way safe for work, tales of party conference hotel shenanigans, unsubstantiated smears and the fact that Bott jumped before she was thrown out on her arse, have all come out in the wash. The detail is here if you want to get to the bottom of why she really left the Tories. Her former party colleagues are clearly glad to see the back of her, some have career reasons to fear stories about her will rear up again. It was always inevitable this attention seeker would return.
If her late night not-quite-WebCameron-antics, now circulating widely, are anything to go by, she is far from camera shy...

A CCHQ insider emails regarding the defection of Beaumont-Bott:

"She was the most ineffective, self-serving, divisive and immature person I ever had to work with. She was only ever interested in whichever spotlight she could get to point in her direction. Today, it seems that's the Labour Party, and they're welcome to her."

When Anastasia Beaumont Bott quit the Tories she said:


"LGBTory is going from strength to strength. We have about 45k for next year already - we have personal letters of endorsements from David Cameron, pledges of support from Ed Vaizey, backing from the shadow cabinet as well as numerous other LGBT celebrities such as Paul O'Grady - next year is going to be huge and I want to be there every step of the way as Founder. I want to be the person who stands up and shows this party isn't homophobic."

When she spoke to the Indy last weekend
she said
:

Today she said in a Labour press release:


“As a now ex-conservative politician, needless to say, I wasn’t convinced. And with your recent manifesto launch, I am still not convinced. Mr Cameron, you have not only lost my vote. You have lost my respect."

And sorry, since when was she ever a "politician"? She was a volunteer activist at best. She swore revenge on the Tories and this is her best effort. She was never exactly camera shy...

Labour's utterly lame attempt to flare this up shows just how low they are willing to sink to try stop the Tory narrative from taking hold. It's too late though, this botched attempt reeks of desperation.

Anything for 15 mins of fame eh?

The Truth About Stacy Bott 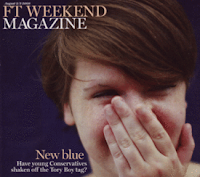 If there was ever three words to send a shiver down the spine of a Conservative Future member, they would be Anastasia Beaumont-Bott. Many an activist thought they had seen the last of Anastasia Stacy, (she changed her name when she moved from Scotland,) when she resigned from the executive in October 2008. She cited at the time that she wished to spend more time with the LGBTory project she was used by CCHQ to front.

However Stacy was quick to leave the Tories all together. In a blazing row in a well know CF watering hole she was overheard vowing to have a revenge on the organisation. And it seems today she has attempted to do that with a
rant to the Indy
. She encourages gay people to vote Labour and said she left the Conservatives because of homophobia. But that's not quite why is it Stacy?

The real reasons she left are ten fold. TB isn't going to name names and jeopodise some serious players in the Party, but lets just say Stacy led a complex private life and fought dirty when she didn't get her own way. As far as TB is aware there still a gagging order on what happened in Scotland, and despite living there for four years, TB encountered almost, almost, 100% sealed lips whenever her name was mentioned. So we'll leave that. The stories of orgies and her relationship with a married CCHQ official that got way out of hand, are more well known though. Especially after ABB turned on those she once trusted.

She smeared her apparent friends who she thought were in her way up the greasy poll. Perhaps the most disgusting example was her attempts to spread rumours that a fellow CF activist was being abused by a family member. Another had been sectioned, another a swinger, another was sleeping with a certain Peer, despite her own little secrets there, all false. As were the accusations of drug dealing at a CF event, again proven to be completely false despite her fake tipoff to CCHQ. Labour are welcome to her, she will poison any organisation she goes near. Her lies were exposed and very quickly she ran out of friends and decided to jump ship before moves were made to have her expelled from the Party.

So for whatever reason this attention seeking, toxic, ruthless careerist decided to turn on the Tories it certainly wasn't because of homophobia she encountered. Just take a look at her internal resignation email she sent rather than the official version that was published. Amongst attempting to spin her way out of the lies she was exposed for telling was this corker:


"LGBTory is going from strength to strength. We have about 45k for next year already - we have personal letters of endorsements from David Cameron, pledges of support from Ed Vaizey, backing from the shadow cabinet as well as numerous other LGBT celebrities such as Paul O'Grady - next year is going to be huge and I want to be there every step of the way as Founder. I want to be the person who stands up and shows this party isn't homophobic."

May that be the end of it.