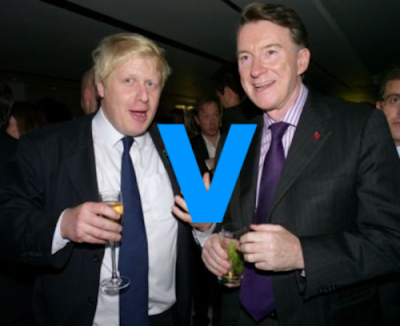 The rumour mill is in full swing in today's Screws. Fraser Nelson
speculates
that Mandy is desperately scrambling for a way to maintain power when the HMS New Labour finally sinks. Ruling out a defection or a job in Europe, Fraser suggests that Mandy has his eye on Boris's job.

TB doesn't agree with that Boris won't seek a second term. If he really does want to be PM, and TB is sure he does, he has to be seen as a fighter and to turn his back on another four years in power would shatter any reputation he has built for a future leadership bid. The Olympics will also be just after the next London elections so why after four years of preparation would Boris not want to be there to run the games?

So a Mandy vs. Boris fight could be on the cards. There has been much speculation about who Labour will put up to fight Boris, and it wasn't long ago that comment pages were talking about Alan Sugar in very much the same way. Mandy is poison and commands little respect outside of the village, it wouldn't be hard to run a Mandy style hatchet job on him. TB is inclined to say bring it on...

News is reaching Tory Bear that the Dark Lord Mandelson is planning on leaving the Brown bunker to conduct a
nationwide tour
for some apparent reason.

Residents can expect a darkening of the skies, earthquakes and spontaneous playing of the Carmina Burana on the radio as some form of early warning system to detect the Dark Lord approaching. Citizens of these fine cities are advised to take cover in a prepared bunker, or failing that under a desk or the kitchen table. Under no circumstances should the Dark Lord be approached as there is extreme danger of death, (both actual and political.)

Local councils and police will be issuing emergency statements on this matter in due course but in the mean time citizens are advised to stay vigilant and report any unusual activity in any of the above cities to the authorities immediately. To find out the location of your nearest shelter contact your local police station.

The return of the Prince of Darkness...

TB just got thinking about Mandy's return to the cabinet. He joked outside Downing Street that it would be "third time lucky". Luck had nothing to do this. This is a calculated and well thought out move on the part of a very desperate man.

Brown hates Mandy, he felt betrayed by him and the loathing was very public. He must be in a truly desperate state to feel that having this scorpion in his cabinet somehow made his position stronger. For Brown to need his enemy then surely the end is nigh...
No wonder Mandelson said he felt "proud" - Proud of his victory over an enemy... and rather chuffed no doubt with a cheeky peerage on the side!