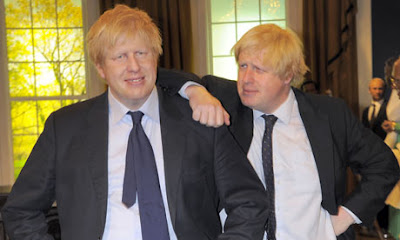 As TB reported the other day, Jo Johnson, younger brother of Boris, has been selected to fight the safe seat of Orpington. Their father Stanley stood unsuccessfully in 2005 and is still seeking a safe seat to contest this time round. What struck TB as mighty odd is the fact that team Cameron directly intervened in the Wycombe selection process a few months back. Stanley Johnson was the front runner to become the PPC, when at the last minute a CCHQ selection list was imposed upon the association. It is commonly accepted that the last thing Cameron wants is a cheer leader for his future leadership rival in the Commons, and the chance for Boris to easily maneuver his way back into the House in either 2012 or 2016 through a safe seat that Stanley was keeping warm.

There is no way that Jo Johnson's candidacy could have gone through Cameron's office without some nod of approval, or at least the chance to scupper it being turned down. Why has Dave personally ended the prospect of Stanley Johnson MP but allowed Jo Johnson to fight a very safe seat? Unless he is more worried about Boris than anyone has yet thought?

Put yourself in Cameron's shoes for a moment, what would you do? Make even more of an enemy of a family, or smile as you damn with your embrace? Boris is clearly popular with the grassroots and has already notched up arguably more executive experience than Dave will have if he walks through the door of Number 10 in a matter of months. He is the natural contender to the crown when things start to run out of steam four or so years into a potential premiership. Where better to have the rival than twiddling his thumbs in local government while actively encouraging a rival to your rival in the House. Bringing Jo Johnson in to the picture is an extremely canny move by Cameron. If he was to be fast-tracked up the ministerial ladder he would split the "Boris" factor that is so clearly part a key plank of Boris's appeal. Allowing the "Boris" factor to become broad church rather than a one man show severely weakens Boris.

Jo Johnson could never challenge Prime Minister Cameron, but he could potentially make it hard for his brother Boris to do so. If come a by-election in 2016 Boris returns triumphant, Cross Rail open, the Olympics a roaring success, London's budget balanced, the city onside he could create quite a storm. Who would be the biggest rival, an outgoing PM or the high flying, equally ambitious sibling?

There is definitely more to the Orpington selection than first meets the eye.