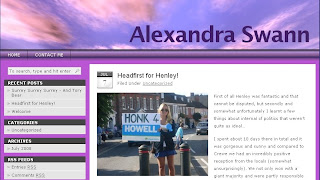 A flurry of activity tonight as TB gets tipped off by no fewer than six CF keenbeans in the space of ten minutes that CF Top Totty Alexandra Swann has launched her very own blog at
www.alexandraswann.co.uk


TB is rather glad Miss Swann has taken his advice and started a blog about Surrey - hopefully now she will write it down and stop boring people to tears with her tales from the Patio of England.

TB is yet to get over Miss Swann's audacity at even threatening to reveal who she thinks is his alter ego, but to be fair her first two posts have made an entertaining read.

Favourite quotes thus far - "Whoever you are, TB, i salute you. And think you’re rather sexy." and;

"it’s awful; living for nearly 2 weeks where everyone else is male means I’ve put on around a stone and further wrecked my liver"

Come on now Alexandra from what Tory Bear hears it was you who was leading the eating in Henley. What was it that waiter said? Something about pies?

On a slightly more serious note her post about
Henley
, and more specifically the internal workings of CF should be read by all members and taken on board.

After the little coup d'etat in Surrey Miss Swann has burst onto the CF scene with quite some force in recent months and seems to be climbing trees the ladder at a rapid rate.

I wonder if Patrick paid for the domain name.

i wonder if tb has a thing for miss swann...

I think a Ms Swann maybe interested in running for the exec next time non? Sounds like a hustings speech!