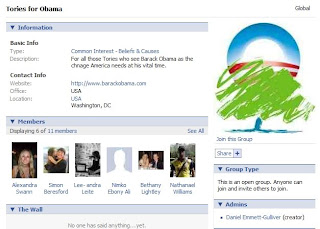 This has got to stop.

Granted there are only eleven people so far in this group but TB urges each and everyone of you to consider your membership of the Conservative Party. What made you join the Tories? Why are you involved now?

Is it just the shiny, glossy, fresh campaigns that both the Conservatives and Obama are running, because that is where the common ground lies.

TB has said it before and will say it until he goes blue... oh wait. Well he will say it again;

The guy is a lightweight - Obama sat on a beach sipping cocktails firing off the occasional press release about the situation in Georgia, while Dave flew out there. (Granted he was going to Turkey but TB likes to think he would have gone anyway...)

There are a million and ones reasons not to support Obama, heck TB doesn't care if you don't support McCain either. To be honest (and it does need spelling out to some people - THIS-IS-NOT-OUR-ELECTION!) your support doesn't count for anything but why nail your such shallow and ill thought out political allegiances so blatantly to the mast? 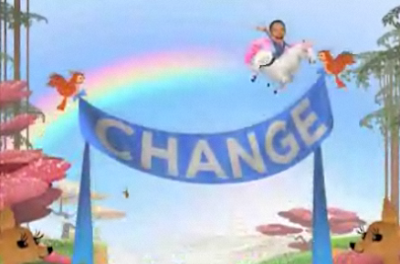 The Conservative Party should not be a haven for people who support massive increases on middle class taxation, pulling troops out of Iraq before they can finish the job started and ripping up the rule books and shredding Constitution under a lame banner of so called "Change".

You should post that on the wall of the group.

Get over it TB. Jeeez.

I've taken all you've said on board, and shall now be supporting Paris Hilton instead of those boring traditionalists. She's the only candidate who will bring real change...is she standing?

That Daniel is a kooky chap!

I also love how Alexandra Swann is on the page you supplied.

It happens less than I would like Tory Bear but I find myself in absolute agreement with you.

I'd like to add that I joined because I join most groups when invited and leave them afterwards to save the whole refuse invitation then going back to look at it process. However I am very much pro choice despite being catholic as well as not being a massive fan of this mess we've got ourselves into (sometimes known as Iraq) and incredibly against the death penalty.

I love you TB.

If you don't support Obama don't join a group called 'Tories for Obama'! Quite clear what that group is about!

I would like to point out that Barak Obama is an elitist idealist with a wafer thin grasp of foreign policy zero experience and a high tax agenda.

Worse still – this ‘charlatan’ wants to pull all troops out of Iraq - just as the surge is showing fantastic results. This would be a disaster for the middle east.

Only John McCain has the character, experience and qualities to lead.

I think the difference in some people's eyes is that the US needs a change (yes I said it!) politically, with someone who could ease hatred toward the West from a region which we rely upon - and also for someone better than McCain to come about.

these Nobama Quislings need to look at his damn policies to see that Nobama is hardly conservative. Tax increases, inexperience and bambiesque foreign policy (god bless jibjab) make him a complete shambles. It appears again we need a good purge of the socialists in the Tory party before we're to roll back - again - the frontiers of the state.

You don't seem to have any problem plugging the UK branch of the College Republicans (aka Young Britons' Foundation)...

Please, Anonymous. We are the UK branch of the Young America's Foundation. If you're going to make such points make them accurately :)

As someone who has been active in both UK and US politics, the idea of a Tory supporting Obama is madness in the extreme. With his glossy exterior and one country or unifying plans he has won over many of the teeming masses in the ‘States. I however was appalled to see DC meeting with and supporting him, not to mention a number of supposedly Conservative individuals backing his candidacy. Obama has the second most left-wing voting record in the entirety of Congress, outdone only by Barbara Boxer (a raving lunatic to anyone who isn’t an outright socialist from California). I can only lament the complete lack of any investigative skills (if googling someone can be termed that) or even the most basic intellectual curiosity it would take for these individuals to discover that Obama is far from a centrist and a reformer, but instead a die-hard left-winger that has more in common with Old Labour than the Tory Party.