Lily Kember should face the music.

Reading the news this morning of yet another lot of hippies embarrassing themselves under the Plane Stupid banner, this time at Stansted, TB was in too much of a hurry to really give it much thought. It's only now that he has learnt that a fellow Edinburgh University student was at the forefront of this madness has his blood started to boil.Now don't get me wrong, Edinburgh has its weaknesses but on the whole you would expect a someone who attends the university to be of a decent intellectual standing and have a good education under their belt. Why then would fellow anthropology student

Lily Kember
feel it necessary to risk being shot under anti terrorist laws and waste millions of pounds of passenger money by being such a fool as to break into an airport and risk hundreds of lives blockading a runway. 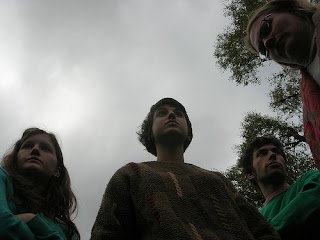 Lily, believed to be one of the strange people pictured to the right, used bolt cutters to enter Standsted Airport tarmac this morning and ground all flights for a matter of hours. The chaos that ensued is widely
reported elsewhere
.
Now under the university rules there is a clause that any student can be removed for bringing "the university into disrepute". This all encompassing rule is normally used on rugby teams that trash night clubs or stoner kids dealing in student halls, however there is absolutely no doubt that Lily Kember has brought Edinburgh University into disrepute with her stupidity and naivety as well as her blatant disregard for the rule of law and respect for private business... This deluded hippy said today "Being arrested is a terrifying prospect, but not nearly as terrifying as the threat of climate change." Well that's all very well and a good but why not add the terrifying prospect of showing this idiot a dose of how the real world works and kicking her out before she can say "Save the planet." If Tory Bear were to be arrested for breaking and entering private property, endangering the lives of innocent bystanders and highlighting just what morons humans can be then he would expect to be shown the door.
Something tells TB though, given his dealings with the university before, especially departments like politics and anthropology that Lily Kember won't be kicked out, won't be reprimanded in any way and will no doubt be celebrated as a hero across campus.
What should happen is Lily and her fellow deluded gaggle of idiots should be charged with those crimes for which they were held, and then be personally made accountable for their actions by repaying each and every one of those passengers who had their flights cancelled. The likes of Ryan Air should not be liable for the huge financial loss they would have suffered this morning. Lily and her friends should face up to an alien concept to them, a little something called personal responsibility - something that most human beings possess yet seems to be massively lacking in this particular breed of insane, left-wing, dangerous, spiteful and deluded fools. When her and her cronies have spent the next ten years working full time to atone for their behaviour, only then will they realise who the plane stupid ones really are.

Why is this student not in lectures?

should have shot her

apparently a daughter missed her fathers funeral due to the disruption....she should have a personal apology from these idiots!

It would be good if people could engage with this in a way which wasn't completely stupid.

Consider the following: airport expansion in the UK threatens to push the UK beyond it's required emissions reductions and push the world closer to catastrophic climate change.

Through a consistent campaigns of direct action, Plane Stupid have brought the third runway into question and have made it's expansion less likely. If they win, this will be a good thing.

Do you disagree with either of these? If not, then you need to see the bigger picture.

Anonymous, you are entirely correct. If everyone remains in their blind state of ignorance towards the impending doom of runaway climate change, we, along with our children and their children, will have to pay for the devastating amount of CO2 being chucked into the atmosphere.

The aviation industry is already accounting for 13% of our climate budget, and if we intend to cut our emissions by 80% by 2050, we really can't have airport expansion at the same time.

These protesters did a fantastic job of highlighting the enormous threat of climate change; we need to act now - if we turn a blind eye to climate change, everything else in our lives will become meaningless as we face a terrifying future.

airport protestors should be rounded up, attached to the outside of planes on take-off and dropped at altitude. fucking loons.

TB is the one with no sense of personal responsibility - the type who'd thinks it's fine to build new airports, even if that means Bangladesh is flooded and Sudan dries up.
As privileged students, you have a massive responsibility - not just for your own emissions, but to change the direction the country is heading in.
And re: the people saying Lily should be shot - do you think anti-apartheid protestors should have been shot when they blocked roads?

no you fucking idiot, the people who were fighting apartheid had a genuine cause and actually made a difference. A load of public school hippies pretending to save the planet are the ones that should be shot.

RESPECT PROPERTY AND RESPECT THE LAW AND THEN WE CAN TALK.

who's 'we'? you mean 'you' in power and public school hippies? you mean climate change protesters and everyone else?

I'd just like to point out that this group of people don't represent every climate change protester: some people do do things lawfully.

I'd also like to respond to Mika: yeah, students have a responsibility, but so does everyone else. I don't see why people are always saying "the younger generation" should be doing something. If anyone should, everyone should - it's affecting everyone.
If that was the case, maybe action wouldn't be done in such an extreme way as to disrupt others' lives, it would happen with the approval of everyone, lawfully and carefully.

Anonymous2: Of course everyone should be doing something, but it has fallen to young people to take major action before we reach the tipping point, the point of no return after which runaway climate change is inevitable.

Seeing as everyone ISN'T doing their bit, it has to come to direct action to make this vital cause known and for people to start acting instead of talking. If we don't do something now then it will be too late.

as an ex-road protestor from the 90s, i know the value of direct action. our protests had a clear aim - to make road building prohibitively expensive - and were successful in achieving this. however, with hindsight, it is clear that this had no lasting impact on car use. it also came at a personal cost to many of those involved.

my message to plane stupid is that it is more useful to get involved in local politics than to make these type of gestures. unlike the road protests, where only private contractors experienced frustration and delay, this affected ordinary people going about their daily lives. yes, we need to stop airport expansion in the UK, but we need to take public opinion with us. lobbying for individual carbon permits would be more effective (albeit less dramatic) than this form of action.

Becky - "it has fallen to young people to take major action before we reach the tipping point, the point of no return after which runaway climate change is inevitable."

I'd like to point out that when you alter a system (like the environment), even slightly, it will have much larger consequences down the line. We've already altered the environments natural state, and while cutting emissions might stave off disaster for a small period, we've long since passed any so called "tipping" point.

Like it or not, sooner or later the planet is due a massive climate shift. We might as well prepare for it and stop pretending we can change the inevitable.

Btw, if you don't believe me, read up on "chaos theory".

p.s - We wouldn't stand for any of this extremist nonsense at Napier Uni...

NVM- I agree that we are due a massive climate shift sooner or later, but even though we have already committed ourselves to this due to the lag time of carbon emissions, we can still stave off climate emergency for a duration which is surely better than letting the earth go into meltdown?

Extreme direct action may unfortunately cause disruption to a few lives of civilians, but a crime like this is justified as it is to prevent a much bigger crime - that of governments and countries worldwide who are emitting gross amounts of pollutants every minute. Aviation is a major problem adding to this.

Excellent piece here. The girl in question also, unfortunately, attended my secondary school - and has shamed it with her actions. Oh well, at least the vast majority of us aren't like that.

Her and her group are an embarrassment to the country.