TB has been taking a look at the new
Labourlist website
that has launched in a preview mode. It's the brainchild of Derek Draper and represents Labour's top down attempt to fight the grassroots movement that ConservativeHome represents, an almost perfect analogy of the Lab/Con view on how the country should be run. It lists who it's contributors will be and he was rather surprised to see
Sarah Mulholland
included. She is the Chairman of Labour Students and generic Unite drone but doesn't exactly strike it big on the blogosphere... 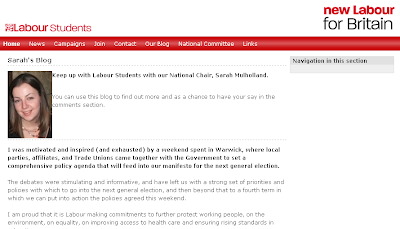 Indeed she hasn't even updated her riveting
Labour Student's blog
for over six months... The CF online presence is updated multiple times a week.

Dolly is going have to try harder than this...

Seems Adrian McMenamin's bosses at the CBI have got the better of his not so secret alliances though. He is very absent from the list.

TB - it will take a lot more than just this to justify your existence as a force for Conservatism after the loss of 3 brilliant Conservative activists due to your previous efforts.

Try to dig up some real dirt on Labour Students, then you may regain an inch of your credibility.

TB has a lot of credibility now as he shown he will stand up against any one who duse not have conservative mindset.

On the statement 'loss of 3 brilliant Conservative activists' first the sick 'joke' shows they dont hold conservative principals. For them beeing brilliant activists well before this I had time for Richard Lowe I leave it at that.

Or perhaps better that TB got the story out there before some Labour activist did? You can't cover things up, if you do then it looks even worse when they come to light.

I think TB did the right thing by blowing the whistle... unpleasant as it is.

Personally, I'm not sure if I agree that the bad-taste behaviour warranted the response it got, but then the PC Brigade wind me up in general anyway.

Reading your blog is not equated to giving it credibility.

I read articles written by Labour activists, Lib Dems, even crazy socialists at times. At no time does my passing interest in what they might say mean that I give them any credibility. The funny thing is, your blog has acted much more in favour to the left than any of the aforementioned articles.

Re-think your blog, quickly, or you will become the most unpopular Conservative blogger there is.

Three brilliant activists? Bahahahahaha, don't make me laugh. They're numpties. Deserve what happened to them!

It's a shame Richard has been suspended but I genuinley think the party is better off without the likes of Lewis and Cox. As has been pointed out on here before, it's not the first time she's been involved in jokes about child abuse. And did Matt Lewis really think the NME and National Chairman had nothing better to do on Boxing Day than read through his self-rightous rant about why he's resigning?? (Though I would bet my life that Owen drafted it for him anyway). TB did the right thing - OK, maybe he shouted a bit too loudly, but someone had to point out just how unacceptable this beheviour is.

Its funny how some people on here will stick up for Labour activists but are happy to throw everything at TB over his treatment of Lewis - surely a hypocritical position, to complain about blue-on-blue fighting and then engage in it yourself...

This is tame! Rake some proper muck, go on! Go through Draper's bins! He probably eats veal and drinks Nesquik, in between downloading internet pornography and posting dead baby jokes to his Myspace.

String 'em all, up, that what I say! It's the only language they understand. You've nobbled those people with a near-the-knuckle sense of humour, now it's time to trash people who hold opinions contrary to your own. G'wan, Tory Bear, you can do it!

And be sure to craft a prissy blog post afterwards, explaining that the world is better off because of you. x