Does he really have nothing better to do?

Yesterday was a sad day and yet strange too. Today's press has picked up on what was immediately clear in the Commons at noon yesterday - the death of Ivan Cameron may have significantly changed Gordon Brown and David Cameron's relationship. Yesterday the empathetic Brown was a human being, and his genuine and heartfelt statement shows just how false he has been in the past. No one can argue that wasn't the real face of Gordon Brown, rather than the line drilled into him by the army of spin doctors and advisers that make up the poison he normally spouts. While the House was in unity yesterday, so was the blogosphere. Friends and critics of Cameron, from both

left
and
right
, came together to voice their sympathy. It was a rare and poignant moment. Even Labourlist
managed
a nod through gritted teeth.

But back to the partisan wars for Derek Draper today...

TB had to chuckle when Dolly responded to a post on this blog with some thinly veiling threats. This is what he said after TB reproduced some photos of Derek and his wife:

firstly, you wanna make sure richard desmond's lawyers don't see this rip-off and secondly on my "drinking" you are making a complete fool of yourself. I have never drunk to excess and indeed havn't even been mildly drunk for over twenty years. pathetic smears. pathetic.

What a surprise it was to get a letter then from the very same lawyers today then! Seems like they got a little complaint from Dolly. TB is surprise the publicity craving, attention seeking twat didn't revel in the fact his mug was broadcast around the internet. The guy is a joke. He claims to be wanting to run a serious internet project, yet spends his day grassing in his opponents to his wife's mates. Grow up.

From now onwards TB will make a point only ever to use this picture in reference to Derek Draper: 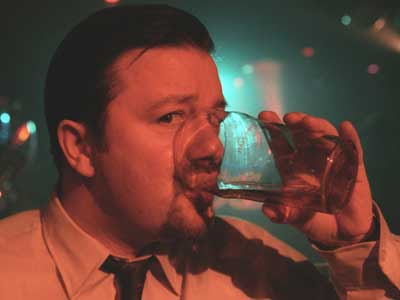 That should do the trick.

The man is quickly becoming the blogging equivilent of tin foil hat conspiracy theorists. Seeing attacks on him wherever he goes, unable to accept when he's wrong.

Bravo TB from TP!
Dolly is a "man" (I use the term lightly) of incomprehensible battiness, the likes of which I personally have never seen up until now.
Quite rightly you refer to the fact that most 'decent' human beings have managed to put aside party politics, preferring instead to behave in a dignified manner in the wake of David and Samantha Cameron's loss.
Draper however, despite the fact that he himself has a young child with another on the way, cannot find the humanity or indeed the humility, to lay off for while. Thus demonstrating to one and all, the selfish, bitter, hard-hearted bastard that he actually is.
(Apols for language!);-)

This really made me chuckle. Had to

What a remarkable likeness!

You mean the hubristic stuff he leaves on other people's blogs in the dead of night is written *sober*? Good lord. Must be more wrong with him than I'd thought.

(That or he's suffering from