Anyone who has ever stood in an election that has got a little dirty, or has had very vocal opponents or faced unfriendly press knows one golden rule that must never be broken. If someone makes an accusation against you, never ever repeat it as it gives it bite. Nixon's "I'm not a crook!" being the most famous example of this, yet it never fails to surprise TB just how stupid people can be at times.
Say you were standing for re-election after a year in office where you narrowly escaped a cop and also cocked up massively on the one project that would be the most obvious and visual impact your organisation would make in a year. Would you try to put these attacks in the past, learn from them and grow, or would you stupidly think it would be a good idea to regurgitate them all over the internet in some shallow defensive move. Well once again step forward Miss Elaine Bagshaw of Liberal Youth: 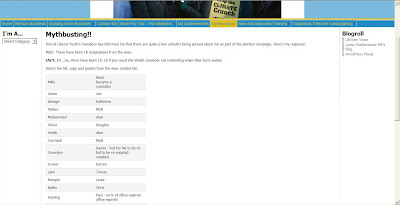 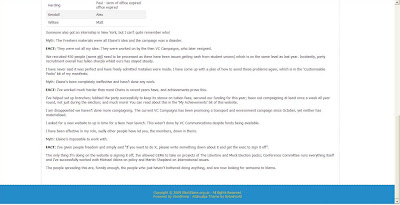 (click to enlarge)
TB has managed to track down some screen shots of the short lived Mythbuster page on Bagshaw's
re-election site
. They disappeared after any Lib Dem activist with a brain laughed their head off. They make for an interesting read and they are a pathetic attempt at redemption after a year of failure. One thing TB has noticed that really riles any member of Liberal Youth is any mention of their Freshers recruitment campaign this year. Apparently the rumour went about that Elaine had allegedly paid over £500 for the design of the materials without signing off on them with her executive or the Cowley St staffer. TB often laughed at, though ultimately dismissed the recurring joke that the materials were designed on MS Paint. Having seen them though, he doesn't know what to believe now:

Apart from being just generally awful they do look a lot like something designed on Paint, especially when they are enlarged.