NUS shifts to the right? 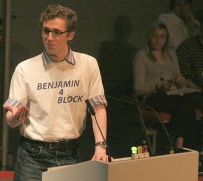 Whenever TB mentions the NUS it always starts the age old argument of how involved should Conservative and conservative students be? The current CF administration have made their thoughts perfectly clear, but that didn't stop some rogue hacks throwing themselves in the deep end. Though he didn't get elected to the NUS,
Benjamin Gray
offers some interesting insights to this years conference, away from the bar, and blows the whistle about what has become increasingly obvious in the last few months- Labour know the election is almost a forgone conclusion and now the NUS is terrified that under a tory government they are going to be frozen out and sent into the wilderness. Rejoice!! some will cry but do we really want them to shift to the hard left?

You can read all of Ben's thoughts
here
, but these bits are key:

The response of delegates who knew I was Conservative Future-affiliated was not hostility, but curiosity, and in some cases outright support. In private many believe that the Conservatives are going to form the next government, and want to know what we would offer them. They also want CF involved so that they can have a means of making their case directly to the party. As I’ve said elsewhere, there are a lot of independents who go to NUS conferences, and are more than willing to support and listen to Tory candidates. A fair number of them will go on to get actively involved in politics. It’s worth being there to show them that Labour Students do not hold a monopoly on worthwhile political activism. Additionally, it gives our activists a way of contributing and gaining experience beyond what the regular CF branch can offer.

Of particular interest is how the Trots are waning in influence. Although this was doubtless helped by many of their membership wanting to go off and smash up a bank window or two during the week, their presence was minuscule. Their candidates got trounced in every election bar one. Both their members of the National Executive Committee were censured for their stage antics at Wolverhampton. Their proposals were defeated by overwhelming margins. So weak were they this year that I was able to stand in the middle of their bloc on conference floor and stir things up without being in much danger. The NUS has moved to the right, and it’s time the Right moved towards the NUS.

Whether or not you agree with the last sentence it is interesting to note the waning trot influence and the fact that Labour Students are privately flapping about the change in government.

If the NUS would like to butter up this tory hack and get him to start writing nice things about them,
this
would be a good place to start.