There has been much talk this week of Macavity Brown laying low and hiding because the going is getting tough. This was one of his favourite tricks as Chancellor, but funnily enough people begin to ask questions when the Prime Minister and First Lord of the Treasury, the leader of a nation, the first amongst equals, is not seen in public for days on end. However panic not loyal subjects, the dear leader Kim Yong Broon is in fact alive and well... Well... not that well.

Instead of focusing on the economy, or dragging the reputation of Parliament out of the mud, dear old Gordo decided to meet some young movers and shakers in order to discuss that burning political issue - votes at 16. Via the excellent, yet sorely deluded blog of

NUS President Wes Streeting
, TB was much relived to see that Gordon was alive and kicking: 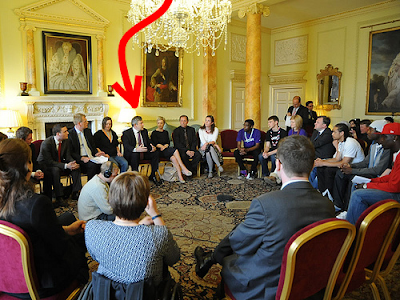 ...and no doubt throwing mobile phones after tonight's polling data.

Apparently he is making an appearance on the Andrew Marr program tomorrow morning, and about bloody time. Given that it is now 2am, TB doubts very much that he will be awake in time, but it should be an interesting show given that recent data suggests that Labour could finish behind
a jumped up pressure group
in the Euro polls, and behind the most
ridiculous group of tits
in the General.

Shall we have a guess? "UKIP is a problem that started in America..."

What odds on Brown pulling a selfish, evil trick in the next few days to try to cling on (another one)?

A deal with the libdems, or wrecking the electoral system to ensure the results aren't that bad, - or both?

Failing that, with Brown hammered in the elections could his successor cling on without a GE?

I am almost depressed that we have a prime minister who has to dissapear for 3 days with his nearest and dearest to muster up for an interview on the cushy couch of andrew marr. its pathetic that he cant even muster an interview which is always soft without shutting the No10 door and firing lines off his willing wonks.