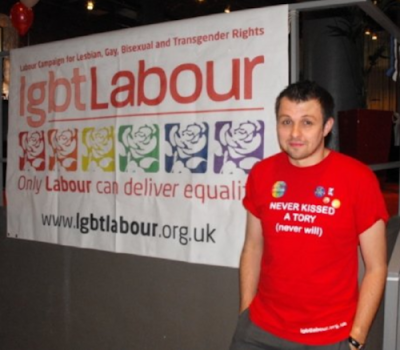 A reader has pointed out this picture of a unknown Labour hack sporting what seems to be the official Labour LGBT campaign t-shirts. What a surprise that they use even this opportunity to attack the Tories. Common consensus is that it is pretty rubbish.

Last year's Pride Brighton saw one hell of a float from Brighton and Hove Conservatives and it has to be noted that even on the important issue of LGBT t-shirt design, the Tories are kicking Labour around the block. The "I've come out... as a Tory!" slogan went down very well. 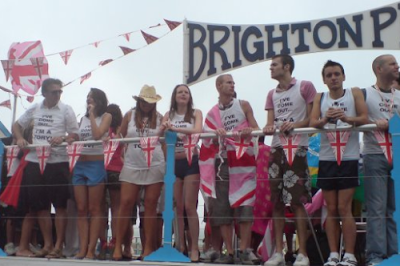 Every so often TB gets contacted by various gay Tories who are sick to the back teeth of being told by Labour members that gay people have a moral duty to vote Labour. This sort of homophobic fear mongering by the left has to stop. Yes ok so maybe the Tories were a little closed minded in the past but Labour's patronising call to arms is based on seriously flawed logic, why should gay people vote on only gay issues? This close minded and naive attitude is yet another reason why Labour can no longer depend on voters that they used to, arrogantly, consider "theirs".

And on a lighter note TB would recommend the Labour hacks check out
these
.

It is wonderful to see the 'does not compute' look of some lefty gays when they find out you are a gay Tory. Sight to be seen!

As a Tory voter, I don't think we should be glossing over

Didn't they teach you any grammar at 'school' ?

Well you could have found a better picture of me in the t-shirt than that.

And FYI - the people on the tory float were PAID.

Tis interesting how easily you've adopted the "i kissed a girl" mantra. Especially considering how patronising it is to those of us who do kiss girls. The song is all for the titilation of straight males and is in no way an affirmation of homosexuality. But i suppose that requires deeper thought being put into things and as a tory you must be unused to that.

Kev P, Tory gays are extremely hot. Just imagine being the working class rent boy of a gay Tory with a country estate and a lavender marriage. I challenge you to top that fantasy.

Seriously though, whilst the freedom of gays from oppression is a classic cause taken up by the left, the cause of gay rights is no less effectively promoted when seen through a civil liberties paradigm - as the Liberal Democrats demonstrated by supporting gay rights LONG before Labour. Labour refused Lib Dem proposals for civil partnerships ten years before they introduced their own. And of course, Labour's version of civil partnerships forbids them from being religious or open to straight couples. I believe in multiculturalism but in the New Labour version we appear to be separate but equal. Ridiculous.

Whilst I don't see a Tory government advancing the cause of gay rights in any way, I don't believe they'll reverse any of the progress that has been made. The currently dominant faction of the Conservative party respects civil liberties, and you are either misinformed or disingeneous to suggest otherwise... of course, I suppose scare tactics are an effecive way to distract from your Government's terrible record on civil liberties in other areas.

In short, the idea that the Labour party is the natural home of gays is simply insulting. (Especially to me, I'm a Liberal Democrat who joined my party in part beacuse of its gay rights record...)

"Especially to me, I'm a Liberal Democrat who joined my party in part beacuse of its gay rights record..."

Oh Miller. Is that the best you can do? Simon Hughes apologised for the way the campaign was run and Tatchell endorsed Simon Hughes for the Lib Dem leadership in 2006.

I don't see why the actions of a local predecessor party 26 years ago should trump the work Liberal Democrats have done on gay rights nor the policies that we have consistently championed, even whilst those policies were still unpopular with the general public.

If you really want to talk about the Bermondsey by-election, perhaps we should talk about how the Labour party tried to put Peter Tatchell back into the closet. We've all moved on, Peter and Simon themselves included.

'Never kissed a Tory...never will' is soooo last year.

They were using it at Manchester Pride in 2008.

It turned out they lied.

You missed a trick here TB. Tory's are better in bed. Thats long been known to be true for the girls... but I can definatly say its true for the guys as well :o)