So remember when Tom Miller denied that he had any involvement in the red rag conspiracy that saw McBride and Draper go down?

He said he had no idea it was going on, you know the whole attempt to brand conservative bloggers as racists etc. Well thanks to a

eagle-eyed commenter
this has come to TB's attention. TB is suspicious that even Miller could be this stupid: 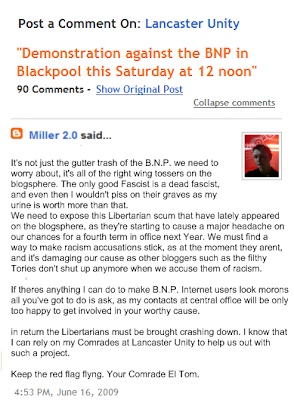 If this filth is really from Miller then it would seem to be comprehensive proof that, once again, Tom Miller is an odious liar. Though at this point TB is going to insert a caveat. The comment has
seemingly been removed
since it was first published on the 16th of June, but not before the screen-grab was taken, and thus TB cannot verify that he isn't being pranked. If anyone can verify the authenticity of this image then please do get in touch. It would be the smoking gun and comprehensive proof of Miller's true intentions, if it is real. There is something fishy about this though. The line about central office is the real sore thumb.

TB would love it to be real and wonders what the squeaky clean
Game Changer PR
that have Miller as some sort of consultant on the books, would have to say about his less that tactless attempts to smear the Conservatives.

That's not actually me.

I've not been 'el tom' for about a year and a half anyway.

Will try to get hold of Lancaster UAF to find out the rub.

By the way, I still don't get the obsession.

I think it's a

Suspicious of this TB - not only for the stupidity of the statement (and the mention of Central Office), but because of the formatting.

The comment apparently from Miller has the time signature "4:53 PM, June 16, 2009". Curiously, this relatively low traffic blog already has a comment with that time stamp on this very post, suggesting it has been copied.

What is also odd, is that the time stamp would make it the second (or possibly third) comment on the thread (if there really was another comment posted the same minute, it could be third). What is not in dispute is that a comment was posted by "Chico" saying "No Pasaran" at 4:06 PM that day. This comment appears first.

There is no comment between the screen shot of the comment apparently by "Miller 2.0" and the header (including the option 'collapse comments'). Also, the first comment doesn't have the grey line between it and the header. At very least, this screen shot has been altered to remove the comment by Chico, and any comment posted the same minute which was posted first.

I'm sure it was sent to you in good faith, but this is not an unaltered screen shot, even if the comment itself is genuine.

Hah nothing would surprise me with leftists, this general election will be the dirtiest in history. ZanuLab will cling on with their fingernails to hold onto power so they can implement more statist tyranny.

Also, the Blogger name "Miller 2.0" would be underscored, as it is here.

Also, LU does not appear to have Blogger profile images enabled for the comments page. If it's enabled, it should appear for every commenter logged-in with a Blogger account. I can't see any on the LU site.

Miller is enough of a cunt to actually say that, though.

It's true that it's dodgy, and looks dodgy to anyone that's seen it- that's why I got in contact with the person who originally sent it to the guy from which I found it.

Sadly, he couldn't provide any real evdence saying that "I can definitely confirm that the comment was originally genuine, and I was shown it by the guy at Stop Common Purpose"

That's it though. Nothing more detailed.

Shame, 'cause I thought it was real for a short time. Before I, y'know, looked at it. It's actually like a magic eye pic, the more I look at it, the more fake it looks.

When I read this post my [non political] friend actually said 'that looks like a shoop'. And indeed she's seen a few shoops in her time...

Just commented at Obnoxio's, so might as well repeat here; some BNP member (who comments on some forums called 'green arrow') has been after me for a while (having faked comments at Guidos as well), which I would actually take great pride in, if they weren't so darned devious.

Perhaps you guys should get yourselves over to Wordpress? There's much greater control over what you can do, and, as far as I'm aware, does not attract the nutters, like blogger. It's a much more powerful blogging experience on WP.org.

Let's face it - If you wanted to set up a Game Changer PR smear unit, then selecting poisions mis-fits like Miller & Hilton would be the obvious choice.

Hilton has the worst case of short-man syndrome in the UK & Miller most certainly looks like a bed-wetter.

Both get off on launching vicious personal attacks, often at vulnerable young women, and then delight in the pleasure of their hit counts going up.

If David Prescott thought he'd be able to open up a legit PR company by hiring these two festering little turds, then he is most certainly wrong.

It was me who broke the 'story'. Fake or genuine? I don't know. Interesting stuff, whatever the real story is behind it all.

If I could just clarify a couple of points re blogger comments, a blog owner/admin can delete any comment and it will disappear, as if it never existed. Also, it takes five seconds to change comment settings.

Meant to say, the underscore of commenters names means nothing. On here, they have underscores, on my blog they don't.

racist socialists are still socialists, no? Since when was BNP or fascism for vthat matter, right wing? Labour have alot more in common with the BNP and other socialists than the Tories surely?! Racism aside, they are all forms of mob rule. Libertarianism seems unimportant to all of them, but the Tories are the closest to a party that give a crap about liberty.

Hardly in the tradition of internationalism or working class solidarity, is it?

I reckon they set up MilIer 2.0 or similar, with one of the lower-case "L"s as an upper-case "I" - the font used on blogger comment pages lends itself pretty well to this.