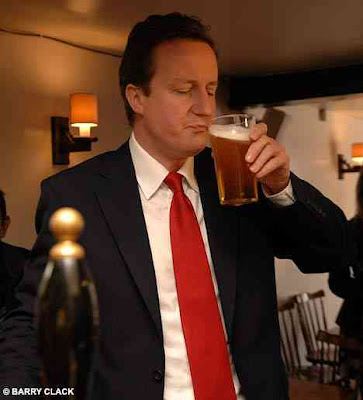 So
The Sun
is reporting that Dave went out for a night with Hull police and is considering trebling the tax on some drinks in order to curb boozing. Sounds like something straight out of the New Labour paternalistic playbook. He attacked the ‘unbelievably low prices of some alcohol’.

Hmmm. What happened to personal responsibility, that little concept
you spoke of just over a year ago
. It wasn't all nanny state and dictating to people what they should drink then:

"David Cameron declared yesterday that some people who are poor, fat or addicted to alcohol or drugs have only themselves to blame.

He said that society had been too sensitive in failing to judge the behaviour of others as good or bad, right or wrong, and that it was time for him to speak out against “moral neutrality”."

“Of course, circumstances — where you are born, your neighbourhood, your school and the choices your parents make — have a huge impact. But social problems are often the consequence of the choices people make.”

You are surprised by this? Dave isn't exactly on the Whiggish end of the party.

We will see exactly the same petty authoritarianism from them as we did with Labour, most of this crap started under Major.

I really have no motivation to vote for the same crap with a different logo.

The only reason I'll still sure as hell be voting Tory come the elections is that I have faith that the REST of the party might manage to squeeze through a few worthwhile laws and MAYBE put a bit of integrity back into British politics.

It won't be easy with Dave's spin machine and New-Labour-esque operating techniques manifesting themselves all over the place though.

Good, honest, conservative, laissez-faire politics is what this country needs. My hope is that Dave is a necessary stepping stone towards that ultimate goal.

Call Me Daaaaaaaaaaave taking away the cheap booze of Labour's faithful lumpen? That won't go down well.

If this turns out to be Tory policy for the GE then there is no way that they will get my vote. I pay quite enough for my bottles of cider as it is. It will just have to be UKIP or LPUK even if they don't stand a chance. I will at least be able to say that I didn't vote to make myself more skint than I am already.

What I don't get is where the hell this cheap alcohol is anyway. It sure as hell isn't at any boozer or club near me. Unless they're calling £2.50 a pint dangerously cheap alcohol. Bloody Hell.

He's talking about the crap you can buy in shops white lightening etc. Much as I enjoy whiggishness I'm not against this idea have you seen the inside of an A&E on a weekend night?

It must cost the country a fortune in police and NHS time dealing with the problems.

Hike the prices Dave then give me an income tax cut. Give me the choice but create a disincentive.