The Future is Bright...

As
Yapping Yousuf
notes, on first impression, the headline figures for
Westminster voting intention in Scotland
isn't great for the Tories. While it will be fantastic to take back seats like Edinburgh South and Perth and North Perthshire, that we would with these figures, it is hardly the massive Caledonian recovery that many would like to see. 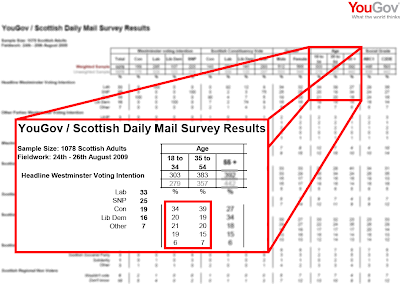 However it is not all bad news. If the figures for just those under 55 - the next generation so to speak, are studied, the tories are in 2nd place behind Labour. There is still the resentment of Thatcher and the last tory government, but it seems to be beginning to fade. It's the Conservatives who will be the opposition to Labour's stranglehold on Scotland in the elections that actually matter - ie Westminster.

Labour cannot be trusted to defend the union, especially given the chaos that they will be in after the election. They are not going to be in any fit state to fight the referendum campaign hand in hand with the tories after they have been wiped out whenever the election is.

The tories must capitalise on this fact and hoover up the pro-union votes of the overwhelming majority of Scots who do not want to destroy the UK.

"
The tories must capitalise on this fact and hoover up the pro-union votes of the overwhelming majority of Scots who do not want to destroy the UK "
.....
Hee hee, your not only cute but your also funny, so much so i dedicated part of my article to you https://advancedmediawatch.blogspot.com/ :)

BTW the poll results are not the latest ones for Scotland

There is yet another Scottish poll, this time from Yougov in the Mail on Sunday’s Scottish edition. The poll was conducted between the 26th and 28th August, so hot on the heels of the last YouGov Scotland poll, which was done between the 24th and 26th. The voting intention figures, each with changes from the previous poll 2 days before, are as follows:

"The tories must capitalise on this fact and hoover up the pro-union votes of the overwhelming majority of Scots who do not want to destroy the UK."

Why?
Of what benefit is Scotlands continued membership of the Union to England?

It is certainly something to be optimistic about, although I fear Scotland will be a fairly slow battle for the Tories.

"Of what benefit is Scotlands continued membership of the Union to England?"

I would also ask what good England gets by clinging on to the Scottish cancer.