Have the Conservative Toffs Gone Bonkers?

Yeah that headline got TB's attention too. It seems the cyber-nat blogger

Advanced Media Watch
has taken a summer course at the Damian McBride School of Political Science: 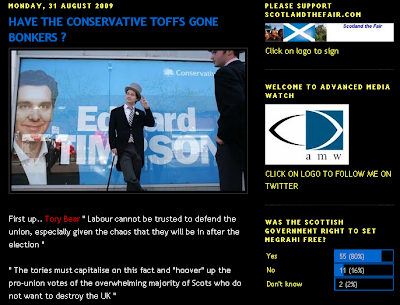 "Could you just imagine Tory Bear campaigning in somewhere like Castlemilk with is bow tie and bowler hat on and wheezing off to the locals how a bunch of Eaton [sic] graduates are going to save the union ?"

So does AMW really approve of the universally derided, pathetic failure of a class war campaign that Labour used in Crewe and Nantwich? Why is a sworn enemy of the Labour Party endorsing their lowest botched campaign?

Hmmm looks and sounds like a smear to this bear, he doesn't have a top hat thank-you-very-much and he most certainly didn't go to Eton. Thank God.

It staggers me that they think this will help their campaign.

Haven't got a top hap? For shame TB. Rectify this at once.

Crumbs, frightful spelling error there. Hat. I do apologise.

Wait... you're accusing someone else of a smear? what?

Isn't that a bit rich?

Difference between a smear and the truth.

Put up or shut up Shapland.

You know what? I'm a middle class person from the East end of Glasgow (well, the middle class part) and quite frankly I would love to be a toff.

Why does a top hat have such negative connotations these days?

And, I must say that the labour campaigner in that picture from Crewe is a pathetic excuse for a toff. I mean, he appears to have his tie poking out of his fake Edwardian one-button rent-a-suit and his top button doesn't even look buttoned. He lacks a pocket handkerchief and his jeans are a painful addition to a very awful outfit. He should apologise to that top hat for associating it with such tomfoolery.

"So does AMW really approve of the universally derided, pathetic failure of a class war campaign that Labour used in Crewe and Nantwich?
...

No of course not, i couldn't resit a wee pop at the friendly bear chuckle chuckle :)

Aye never mind that, have you got your Margret Thatcher ring tone yet ?

The Crewe campaign was ridiculous. There are a lot of reasons to hate Tories, where they come from aren't one of them.

F***ing proles in the Labour party.

When they're doing one of these dreadful photo ops, at least they could try to get morning dress right.

What kind of twat would ever wear a morning suit without a waistcoat?

What kind of prat would ever button up the jacket on their morning coat?

What kind of moron has their top shirt button undone whilst wearing a tie?

What kind of ninny puts on trousers designed for braces, and wears them without braces so they're sagging at least four inches below where they should be?

What kind of git wears a top hat at least three sizes too large?

The kind of retard who rents clothes with the words, 'Make me look posh', that's who. The standard of tailoring and sartorial ignorance in the Labour party deeply sickens me.

whats wrong with Eton? I wish i had gone there. Wouldn't be so thick and poorly connected now. My old school friends are only good for recomending cheap tradesman and sourcing marijuana

Yousuf Hamid said...
The Crewe campaign was ridiculous. There are a lot of reasons to hate Tories, where they come from aren't one of them
............

Yousuf where in my article did i use the word hate ? The word hate does not and will not have a place in my vocabulary unless im on a Hearts FC forum then its open season.

Glad you recognised how awful the Crew and Nant by-election was for Labour and the OTT negativity they used against the Conservatives.

Your to decent for the Labour party but i wouldn't say your Highbrow enough for the Tories and i wouldn't recommend the Lib Dems unless your into woolly jumpers and toasting marshmallows in Glasgow green so why not join the SNP ? You know you want to :)

AMW, read your Orwell. (Or your Marx if you want to go into a sociological exposition of the proletariat.) The term 'proles' denotes those who have begun to unquestioningly accept and even revel in poverty and its trappings - those who no longer see poverty as holding them back, but have begun to see active good in poverty of education, poverty of material welfare, and impaired freedom of thought and expression.

'Proles' are the enemies of those who love freedom, for their worship of (and chauvinistic enforcement of) the mundane, and the mediocre 'average.' They are the true enemies of the worker. This starts off in subtle, insidious ways, such as anti-intellectualism, and 'class war' rhetoric against wearing items like top hats.

Yes i do know the meaning of "proles" "proletariat" and as i am an SNP supporter and not Labour, then surely you can see where my sarcasm was coming from ?

Heaven forbid, dear boy. I wouldn't want a ringtone of a Prime Minister as lowborn as either Churchill or Thatcher. The jumped-up son of a Duke's SECOND son? The grocer's daughter? PLEASE! Talk about petit-bourgeois.

Unfortunately, there are no known recordings of the Marquess of Salisbury's voice, and I can't imagine much of a demand for ringtones of the Earl of Home. A pity, now THEY knew how to govern with style...

Correct me if I'm wrong, but isn't Cameron the only Etonian in the Shadow Cabinet?

Errr. Punchup in the Toy Box.

Will drop back in a couple of months.