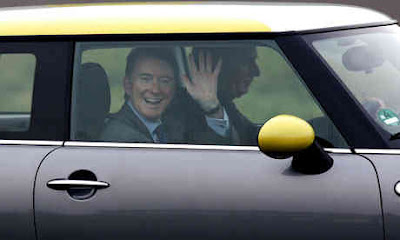 Matthew d'Ancona has used his
Telegraph column
to nod to the PM4PM bandwagon and even damns Labour with faint praise:

"Labour doesn't want him as its leader, and it won't happen. But the party is working hard to suppress a smile after the brief reign of King Peter, for a simple reason that may serve them all well in the future if they have the wit to remember. In this dark hour, Mandy has reminded them what it feels like not to be scared."

d'Ancona also reminds us that:

"Mandelson, twice forced to resign from the Cabinet, has a record as long as your arm, and can't see a scandal passing in the street without shouting: "Hey, wait for me!" He may have a safe pair of hands when it comes to minding the shop in Gordon's absence, but he is otherwise (or at least has been) politically radioactive."

Funny he should mention that given it was the Sunday Time's
obligatory story about Mandy
that caught TB's attention next, or perhaps he should rephrase that, the distinct whiff of corruption about it perked him up:

"Lord Mandelson, the business secretary, ordered officials to draw up draconian regulations on internet piracy just days after he had a private dinner with a Hollywood mogul who is a critic of illegal file-sharing.
Mandelson is understood to have demanded that internet service providers be given new powers to cut off the accounts of British web users who persistently download music and films for nothing.
The business secretary’s intervention comes after a meeting last weekend with David Geffen, the billionaire producer who co-founded the DreamWorks studio with Steven Spielberg.
Mandelson and Geffen dined on August 7 with members of the Rothschild banking dynasty at the family’s holiday villa on the Greek island of Corfu."

Talk your way out of that one oh great master!

The Digital Britain bill due to be debated next year is becoming farcical. They want to have the power to cut off or reduce the broadband connections of people who download films and music. They will also be setting up a big list of repeat offenders. Too many problems of government and states infringing on the rights and freedoms of its people start with big lists. Just stop it. History has taught us that lists drawn up by governments never end well.

Seriously though, this is a textbook bit of cash for access, it might not be crumpled fivers in brown envelopes but... "have you seen my yacht/villa... oh you came here last year too? Of course you did." First there was Lord Taylor of Blackburn, Lord Truscott, Lord Snape and Lord Moonie, should we be adding Lord Mandleson of Foy in the County of Herefordshire and Hartlepool in the County of Durham to that list?

How did this slip past me? I think this stroy sunk without a trace. It would be cool if you could repost it "MANDLESON ACCEPTS BRIBE" then leave it up there all day. No one at all apart from you is championing this story.