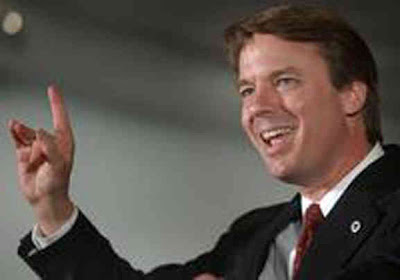 After lying about it for eighteen months, it seems slimeball and Kerry Vice-Presidential candidate John Edwards has
finally admitted
that yes, he did indeed knock up his mistress. Like so many great sex scandals he probably could have got away with it had it if he hadn't lied and lied and lied. The fact his wife is dying of cancer didn't help either nor can the investigation to see whether he used thousands of dollars of his campaign funds to try buy his bit-of-skirt-slash-former-aide's silence. The DNA test never lies and it looks like this nauseating scumbag is finally toast.

Couldn't happen to a nicer guy.

It's sobering to think just how close this clown came to sitting one heartbeat away from the Presidency.

His more poisonous legacy was his work as a medical malpractice lawyer. In the wake of his biggest award, an obstetrics case, malpractice premiums for obstetricians climbed to the point that many simply shut down their practices. Large swaths of rural Kentucky, for instance, were left without service--and that's a lot of people.

To hear him and his cronies blather on about their 'compassion' for the downtrodden is maddening.

And, the worst part is: His poor wife will not survive the cancer. He'll lay low for a few years, and then he'll be 'rehabilitated'. Tearful Oprah appearances, book tour, consultant work, etc. Memories fade, and he'll pose with his newest progeny as a wonderful father.

It worked for Ted Kennedy, awarded the Presidential Medal of Freedom this week, in the same group with true notables such as Sidney Poitier and Stephen Hawking.

My children don't even know the name Mary Jo Kopechne. She would be sixty years old, had she not had the misfortune to climb into the car with Ted Kennedy in the summer of 1969. The 40th anniversary passed without public mention...