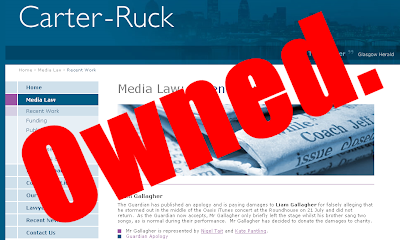 Guardian Editor Alan Rusbridger announced the fantastic news that Carter Ruck had backed down
over Twitter
. How very appropriate. The Guardian can now print what the internet has spread over and over and over again.

Yes this is a victory for The Guardian, in a battle it should never have had to fight, however it would not have won without the weight of the new media behind it. Without blogs and twitter the Guardian would have been forced to bow down to the mighty Ruck-us with very little they could do. They won the battle, but they wounded themselves so heavily in doing so, it is unlikely they will last the war. If there was ever proof needed that the MSM was dying, let this be it. The Guardian have signed their own death warrent today, wouldn't celebrate too hard over this one.

Another nail in the old media coffin.

As A Protestant can I arm my self and then legally attack the legal company, as it states in the Bill of Rights?

I think Tory Bear is a wonderfully effective investigative journalist who has got Jacqui Smith shaking in her boots.

I don't understand why the gardian did not just publish any way?
The injunction was clearly not going to stand up.
Make carter-ruck sue you afterwards.
They would have looked even worse.

not warrent, but warrant

I'm not sure, Anonymous. Are you of a recognized flavour of Prodestanism, or one of the non-conformists who'd better watch out at the next Priestly Riots?

I hear Peter Bottomly is reporting Carter-Ruck to the Law Society.

This is like trying to distinguish all those Bruces in Brisbane.

I have a suspicion that The Guardian played Carter-Ruck by arranging with Paul Farrelly to table the question, forewarning Carter-Ruck and playing scared when they attempted to gag 'em. Then, line 666 came into force.

PS Of course I meant Bottomley.

PPS What do Muslims have to do with this?