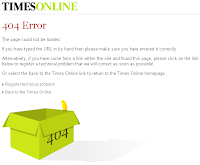 Did you read Jeremey Clarkson's column in the Sunday Times? No? Nor did the Bear until they pulled it after some lefties sniffled. Yes it's moderately insulting to a broad range of countries but what were you expecting when you read an article by Clarkson? Come on. If you don't want to be offended, don't read offensive peoples work. It's not rocket science.

Anyway to prove a point TB decided to reproduce the article in full:

Get me a rope before Mandelson wipes us all out

I’ve given the matter a great deal of thought all week, and I’m afraid I’ve decided that it’s no good putting Peter Mandelson in a prison. I’m afraid he will have to be tied to the front of a van and driven round the country until he isn’t alive any more.
He announced last week that middle-class children will simply not be allowed into the country’s top universities even if they have 4,000 A-levels, because all the places will be taken by Albanians and guillemots and whatever other stupid bandwagon the conniving idiot has leapt

I hate Peter Mandelson. I hate his fondness for extremely pale blue jeans and I hate that preposterous moustache he used to sport in the days when he didn’t bother trying to cover up his left-wing fanaticism. I hate the way he quite literally lords it over us even though he’s resigned in disgrace twice, and now holds an important decision-making job for which he was not elected. Mostly, though, I hate him because his one-man war on the bright and the witty and the successful means that half my friends now seem to be taking leave of their senses.

There’s talk of emigration in the air. It’s everywhere I go. Parties. Work. In the supermarket. My daughter is working herself half to death to get good grades at GSCE and can’t see the point because she won’t be going to university, because she doesn’t have a beak or flippers or a qualification in washing windscreens at the lights. She wonders, often, why we don’t live in America.

And they see Alistair Darling handing over £4,350 of their money to not sort out the banking crisis that he doesn’t understand because he’s a small-town solicitor, and they see the stupid war on drugs and the war on drink and the war on smoking and the war on hunting and the war on fun and the war on scientists and the obsession with the climate and the price of train fares soaring past £1,000 and the Guardian power-brokers getting uppity about one shot baboon and not uppity at all about all the dead soldiers in Afghanistan, and how they got rid of Blair only to find the lying twerp is now going to come back even more powerful than ever, and they think, “I’ve had enough of this. I’m off.”

It’s a lovely idea, to get out of this stupid, Fairtrade, Brown-stained, Mandelson-skewed, equal-opportunities, multicultural, carbon-neutral, trendily left, regionally assembled, big-government, trilingual, mosque-drenched, all-the-pigs-are-equal, property-is-theft hellhole and set up shop somewhere else. But where?

The Caribbean sounds tempting, but there is no work, which means that one day, whether you like it or not, you’ll end up like all the other expats, with a nose like a burst beetroot, wondering if it’s okay to have a small sharpener at 10 in the morning. And, as I keep explaining to my daughter, we can’t go to America because if you catch a cold over there, the health system is designed in such a way that you end up without a house. Or dead.

Canada’s full of people pretending to be French, South Africa’s too risky, Russia’s worse and everywhere else is too full of snow, too full of flies or too full of people who want to cut your head off on the internet. So you can dream all you like about upping sticks and moving to a country that doesn’t help itself to half of everything you earn and then spend the money it gets on bus lanes and advertisements about the dangers of salt. But wherever you go you’ll wind up an alcoholic or dead or bored or in a cellar, in an orange jumpsuit, gently wetting yourself on the web. All of these things are worse than being persecuted for eating a sandwich at the wheel.

I see no reason to be miserable. Yes, Britain now is worse than it’s been for decades, but the lunatics who’ve made it so ghastly are on their way out. Soon, they will be back in Hackney with their South African nuclear-free peace polenta. And instead the show will be run by a bloke whose dad has a wallpaper shop and possibly, terrifyingly, a twerp in Belgium whose fruitless game of hunt-the-WMD has netted him £15m on the lecture circuit.

So actually I do see a reason to be miserable. Which is why I think it’s a good idea to tie Peter Mandelson to a van. Such an act would be cruel and barbaric and inhuman. But it would at least cheer everyone up a bit. onto in the meantime.

Why draw attention to it by pulling it?

I thought it was a fairly harmless post when I read it this morning. Who can be so offended to get this pulled?

I knew this would be trouble when I read it - not altogether surprised it attracted criticism, though I'm shocked they've actually pulled it.

I think it's perhaps the phrase "mosque-drenched" that hit a few hot buttons...

Actually you can go to Germany I did with my family in 1978 (Sunny Jim time) and we have never regretted it.

What a country we live in, when such ordinary (if funny) comments are not allowed.

Down with the thought Nazis.

Classic Clarkson! The man has a sense of humor, and a real appetite for LIFE! Little wonder the prim, timid, and politically correct are so upset by him!

Monday nights here is Top Gear night, and we try not to miss it.

It's a shame he does not like America, or seems not to. Things here are in a sorrier state than they have been for years, but the citizenry is beginning to 'push back' in a major way. And, furthermore, this is a big place, where one can still find quiet places to live freely.

Shame on The Times!

How about everyone just not buy the rag for a few weeks, and let it melt down financially? That does seem to get the message across!

Thanks for sharing this with us all, TB. You're the best!

TB, it's still up there. Try accessing it in Internet Explorer, as The Times apparently don't guarantee that any of their articles will work in any other browser. I use Opera Browser, and have that very same 'error' problem with half the pages I try to read. Rather annoying, and I've emailed them about it, but they don't seem to care.

And there was me, listening to a football match, while mentioning to Tom Harris that his party is

ignoring the vast majority of the public
.

Then I see that they aren't just ignoring, but censoring too.

He could go to Ireland, been a bit too peaceful there for a while.

The article appears to be back. Can't see if anything was modified.

Is this the same Sunday Times that pulled Philip Pulman's marvellous "Are such things done on Albion's shore" article?

Bought and paid for, I guess.

Only one problem with this story.

Go join the BNP for pete's sake, I see only minute differences between Clarkson's drivel and their hate speech.

Also, perhaps Clarkson should consider sending his daughter to college in America, she could get health coverage as a student and lord knows Clarkson can afford it.

took me under a minute to find out that the article is there on the website.

next time try doing the most basic research before shrieking about censorship. pathetic: this is why bloggers don't get taken seriously.

obviously you're not going to publish this comment because you're a hack.

It was pulled for forty eight hours. thank you for notifying me that it was back up.

"If you don't want to be offended, don't read offensive peoples [sic] work."

Great article. I live in Germany myself, and Clarkson's right. But wait. There is a country he forgot. A mere 40 minutes' plane ride from Britain where they speak great English. The beer's good, they're polite and considerate and non-bureaucratic. They have no punitive inheritance tax for foreigners, no capital gains tax (so important for non-Labourites), they're bright and happy people and have more lovely cities and countryside than you could shake a stick at. Ladies and gentlemen, I give you ... Nederland. Sorry, I gotta go.

After graduating from the Prince Phillip Academy for Diplomacy the young Clarkson intended a career in the environmental movement. His green credentials were clear from the start; he was envious of anyone with money.

A keen multiculturalist Clarkson started the Made-a-Veil society and was a frequent visitor to the West London Mosque where he stole shoes.

By now married he fell under the spell of a young moustachioed politician. But like Romeo and Julian this affair was destined for tragedy by the political chasm that separated them.

But the resilient Clarkson was down but not out. He applied for a job at the newly established BBC drugs advisory programme Top Gear. To his surprise he was asked to review a car but due to his green credentials he had never learnt to drive. Although still without a driver’s license his involvement with the programme has continued to this day using a driving simulator.

Recently his interest in politics was again stirred and the upcoming election sees him as special advisor to SARKIP. When successfully independent this blissfully car-free Channel Island will be the natural haven for a man of so many talents. Let us hope that he can live out his days growing his own vegetables, maintaining his own wind generator and writing his autobiography “These Boots are Made for Walking”.