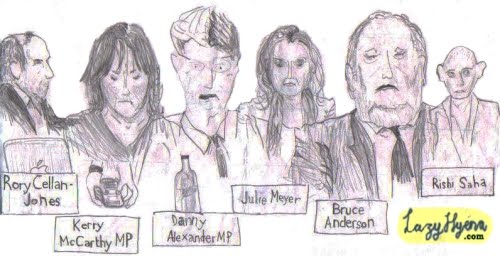 TB went along to the Delib/Henry Jackson/Messagespace debate last night about whether the internet or policy will win the day in May. One thing is very clear immediately. Rishi Saha from the Tories is far, far more realistic about the limits of the internet and how Obama used it to direct people back to old media, and raise money for TV ads. Kerry McCarthy was as deluded and idealistic as ever and failed to even grasp that Labour HQ don't really care about Back the Ban or Ed's Pledge, but that these are mere email harvesting tools. Rory Cellen-Jones, the BBC's techno correspondant, seems to have his head in the right place. Julie Mayer was a walking cliche. TB wasn't exactly sure what Bruce Anderson was on about.

Good news is that Kerry has decided to drop the sexist misogynist line about Tory Bear. Well she didn't use it to his face at least, surely she would say anything she would put online to his face... right? TB certainly did...

UPDATE: 15.40: Will Heaven has a pretty
comprehensive round up of affairs
.

Saha is wetter than Flipper and has been since his days at Wave and Frankie Maode's "Mainstream".

He will be trouble down the road.

awww i missed a delib opportunity to abuse the cronies of old media? it was my finest hour!