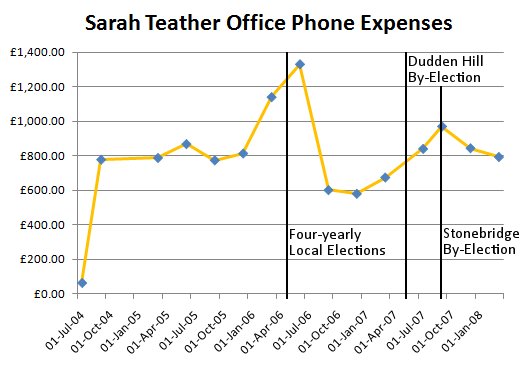 Most damning for Teather is the fact then when put into a Left Foot Forward style excel masterpiece, the phone data shows clear increases in use during Liberal Democrat election campaigns. So just what is taxpayer payer money being used on? Teather's parliamentary office or election of yet more leeching Lib Dem councillors? As ever PS has the full story.
It's a must read.

She has to go. How wonderful to know that if this is done right she will not be on Question Time again.

I don't mind opinions contrary to my own but I do so dislike vacuous nothings who on first sight can be clearly identified as never having had an original thought in their existence.

She is far from the sorts I wish to see in the House. Please do this right and make sure she has to resign.

"She is far from the sorts I wish to see in the House" - I hate to be preachy, but that's the point of a representative democracy. You don't just declare who you want in the Commons and it happens.

Every political party uses their communications allowance to send out letters to their constituents of a political nature - I don't see the issue. If Teather can still do her job in her constituency (which she does fantastically, by all accounts), then why shouldn't she be allowed to say "I've done a great job, re-elect me and more people like me please", which is no more than my local MP (of a different party) has done to me on several occasions.

Well if you hate being preachy don't be.

Thank you for the explanation of representative democracy. When did I suggest I should have arbitrary power to demand who sits in the house?

I do not mind opposing views. If however somebody whose processes and actions I dislike I am able to call them on it and also rejoice when they receive their comeuppance.

Also your second paragraph entirely misses the point. It is not her on the phone that is the concern. It is others allegedly doing it for purely party reasons unrelated to Westminster and her claiming for it as her own.

You never stated that you should have the power to decide, but you said "she has to go", which to me implies that you feel that your opinion on this subject somehow necessitates her leaving office, which implies the same thing. Do you not feel that her constituents should be the ones to decide this, based on her actions representing them rather than you, an outsider who is basing his decision on who "has" to represent them on disliking what someone says on question time?

Furthermore, whether or not she is on the phone, the fact is that it comes from her office and so is representative of her opinion, and carries her support. I'd rather receive my MP's campaigns this way, through intermediaries, than have the MP themselves spending their time campaigning at the expense of their real job.

Despite your objection to an anonymous status, you're hardly displaying your name, address and phone number, are you? At the end of the day, you're also hiding behind an avatar, just like I am.

This seems like a straight forward observation which i fear may prove that the whole accusation here is based on pure speculation - the 2005 General Election spike?

This seems like a straight forward observation which i fear may prove that the whole accusation here is based on pure speculation - the 2005 General Election spike?

You quoted me as saying "She is far from the sorts I wish to see in the House" and then told me I had no right to decide what sorts should represent people.
I said I was expressing a preference not a decision. It was a completely reasonable comment. However, now you seem to be basing your stuff on the "she has to go" line. 0/10 for consistency.

Anyways, "She has to go" refers to standards not being met. Different to her views and method of reasoning to which I was referring earlier and obviously concede is the business of the constituents. The dignity of the house affects us all not just her constituents and therefore I can reasonably suggest when something is a matter for resignation/dismissal/de-selection etc. Also, again this was an opinion expressed by me. It does not imply that I should wield the axe. When somebody expresses a desire to see somebody gone it really really doesn't need you coming along and explain that "actually you don't have the power to do it." Childish.

All in a very pedantic and entirely pointless line of argument from you. Let alone wrong.

"at the end of the day, you're also hiding behind an avatar, just like I am."

Are you serious? You are doing it again. I shall explain the difference. I have a unique avatar which also links to my blog, people can see which comments are by me and then contrast and compare. Anonymous ones are either from one very inconsistent person with a strange name or they are from lots of different people with varying opinions. The latter makes discussion more difficult as one is unable to identify exactly which posts are within the conversation and also allows one to maintain any damn position they choose in the moment.
The above should have been very obvious, instead you try and point out that I have not supplied my real name etc. Like I wasn't aware of this or aware of the fact that I don't have arbitrary removal powers in Parliament.
It seems you are unable to work with assumed apostrophes. Pedantry won't get you very far.

Your middle paragraph proves you don't even know what this is about. Go back and read the original post properly and then come back. This is just painful now.

"You never stated that you should have the power to decide, but you said "she has to go", which to me implies that you feel that your opinion on this subject somehow necessitates her leaving office, which implies the same thing."

You need to work on your implications.

If I see a rugby player gouge someone and make the comment "he has to be banned for at least 6 months", does this implies to you that I feel my opinion should necessitate the banning? Of course not, it is a comment.

Bizarre thinking by you. Are you really so pedantic that people should have to disclaim everything with comments such as:

"It is just my opinion and I announce that I am in no formal capacity responsible for carrying out the actions I am about to recommend , but I think she should have to leave her office, if that's ok with the constituents."

To anybody else, "She has to go" is enough.

Must be fun round your house.