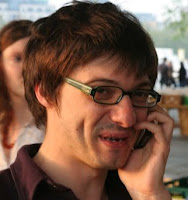 Self professed lefty Alberto Nardelli and co at
Tweetminster
have a pretty sweet set up going - essentially they are paid to sit on the sofa all day watching their Tweetdecks. A hundred grand of funding has bought them less than ten thousand followers on Twitter and an estimated forty thousand page views per month on their website. However the media is still a sucker for Twitter stories, hence why their report in to engagement by MPs and wannabee MPs this week got
coverage.
They do try to keep up a semblance of impartiality but the figures about Labour's twitter following beggared belief.

Essentially the report said the CCHQ operation has the most influence of the party machines, where as Labour grassroots use Twitter a hell of a lot more. Given that they have been paid so much to run the service by a public affairs agency
Politics Direct
you think they would have bothered to do their sums properly.

- Not one of the followers follows more than one MP or PPC each.

- Not one Labour MP follows another.

Tweetminster are inflating the figures by counting people who follow MPs and PPCs together. It is no coincidence that 91,061 + 22,140 = 113,201. A simple look at any prominent Labour tweeter would show you they follow multiple MPs and PPCs, rendering the Tweetminster figures dud. Are these all counted as uniques?

Are the Conservative figure be similarly affected? It would definitely take a knock, but with many fewer Conservative MPs on Twitter (16 to Labour's 65) the effect would be far smaller. Most Tory PPCs on Twitter are followed by very small numbers so it wouldn't take much of a knock that way either. The idea that Labour are some how the kings of Twitter with a vast army of online followers takes a bit of a hit in light of the fact numbers have been cooked up.

Stick to the Wii chaps.

I read somewhere today that Twitter is going out of fashion; the number of users is apparently falling. Just like Labour to jump on a band-wagon as everyone else is jumping off!

Fewer! Sorry, I know my grammar isn't always up to scratch but the mistake between 'less' and 'fewer' always bugs me.

Never been a big fan of it, genuinely don't get the point.

New expansion for Twitter. Now its possible to personalise it.

Oh, dear. More lying for the cause?

The left, for all their claims, don't really seems to have even started to get the new age of information, do they? Making stuff up and trusting to luck that nobody will find out doesn't work very well, these days. Too many people out there who can spot the lie and then bring it to the attention of a wider audience.

Interestingly, if you have a closed group of 350 twitterers, such that each person is followed only by the 349 others, then by the methods used by tweetminster you would say that those 350 people are collectively follwed by 122,150 people (350 x 349).

I am pleased that, after several years in the online wilderness, Labour is finally getting its act together.

The Tweetminster report underscores what has become conventional wisdom in the last six months or so - that the broad left probably have the edge on Twitter.

for example
) aggrieved that the left are beginning to make inroads: "Labour are saying they TOTALLY DOMINATE Twitter and are going to WIN THE ELECTION because of it but that's crap because..."

After years of crowing and statporn from right wing bloggers, I'm sure you would permit your friends on the left a momentary smile (it's going to be a long election).

But don't fret, TB, you guys still get more hits than us.

Of course, the other issue is that following Labour on Twitter doesn't necessarily make you a Labour supporter.

Surely I can't be the only one to think this twittering & tweeting is pathetic? I can quite understand the attraction of facebook & friends reunited (my URL) but little inane comments posted by rather sad people seems soppy in the extreme.

"We are not funded by Politics Direct - tip: companies house can tell you this."

What is the Company number?