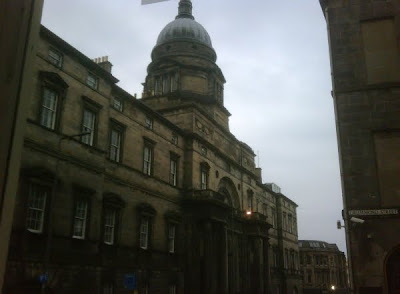 TB is sitting in Edinburgh fresh of the sleeper and bleary eyed. Nice to be back and sitting reading the papers with that as the view. The splash is pretty much what could have been hoped for Dave: 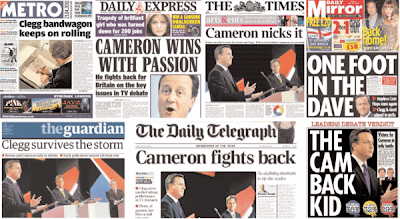 How deserved it is remains to be seen when some more sunbstantive polls emerge in the next 48/72 hours. One thing to note is the pollsters aren't seem to know about as much as anyone else in term of what is really going on out there. They are up down and all over the place. A scary thought. Tories seem to be splitting into two camps - deniers and realists. Over night TB got a thinking. If we are set for a hung parliament, the Tories need to start preparing for it now. on their own terms, rather than when it is forced upon them . The Orange Bookers won't be a problem, but the left bonkers sandal wearing grassrooters might be. Clegg's whole message of change will be skewered if he chooses to prop up Brown. If sixty percent of the voters, as it seems at the moment, don't want Gordon there will be no legitmacy in his government. Will it be taken lying down?

The Liberal Democrats want to rip up the rule book in terms of the electoral system, and frankly if Brown is returned despite taking a thumping from the people, TB will be inclined to agree with them.

Very sensible points - the Tories to need to get ready for a no overall majority situation. I doubt that the Lib Dems would want more than a confidence and supply agreement anyway, with the understanding that they could vote freely on other issues. In that case the biggest obstacle would be aligning Tory and Lib Dem economic policy.

The Liberal Democrats want to rip up the rule book in terms of the electoral system, and frankly if Brown is returned despite taking a thumping from the people, TB will be inclined to agree with them.

Best correct the typo you ridiculed Labour geeks for making, delete this comment and act casual.

I'd just like to say that I hope it is a hung parliament and that the Lib Dems go into coalition with Labour.
The best result Cameron can hope for is a wafer thin majority. He will try and do some of the things that need doing but he will be frustrated at every turn by the public sector unions, who will in turn try and turn the whole country into a battleground. So Cameron will end up as beleagured as Edward Heath.
Labour will be re-energised by choosing a new leader - with the possibility of a new election at short notice, they may well chooose the charming looking Alan Johnson (great identity change for the old union troublemaker) and get a boost in the polls. This will put even more pressure on the Cameron government, and it'll either implode trying to do the right thing, or u-turn into scrapping spending cuts and become useless anyway. And there's a good chance a Brown-less Labour could be back within a couple of years.
In the other scenario, the Lib Dems go into coalition with Labour - presumably without Brown, so we'll even have an unelected Labour PM despite having an election! The new coalition will try to bring in PR... you can't do that without a referendum, and if they have anything about them, the Tory leadership will be able to smash holes in any pro-PR campaign and get it defeated.
This will end the Lib Dem-Labour coalition within a year, lead to a second election and a real Tory majority of at least 50, so a new government will really be able to get on with things.
That's what I think - yes, a Conservative government, but in a few months time, when they've given Labour and Lib Dems enough rope to hang themselves with.
A thumping Tory majority just isn't possible right now, so play the long game and by 2011, both Labour and the Lib Dems will be as far away from power as they were in 1983, ha ha.