The first case of electoral Twitter law breaking in the land and who do you think it could possibly have been... drum roll please... of course. Labour's very own Twitter Tsar Kerry McCarthy. As a lawyer and a whip you would hope she would have just taken a moment to think, "hang on...maybe I shouldn't broadcast this sensitive infomation to the world". She has tried to laugh it off to

To the Chief Constable,

I am writing to ask you to investigate a possible breach of electoral law by Kerry McCarthy, the Labour Party candidate in Bristol East.

On Thursday, April 29th 2010 at 14:36, it appears Ms. McCarthy posted the following information on her Twitter account:

When the information was "retweeted" (re-posted) by other users of the site with queries as to whether her knowing and publishing the information was legal, she apparently deleted the tweet. It seems did this too quickly for it to appear in the Google cache record. It does, however, appear in the records of Tweetminster, an online aggregator of political tweets. The relevant Tweetminster record is appended for your convenience and is available at the following web address:
https://search.tweetminster.co.uk/statuses/?q=first+pvs+opened+in+east+bristol

Upon phoning Bristol Electoral Services, we were told that all the candidates' agents were present at the opening of around two hundred postal votes this week. They are not meant to see the results, however, and if they do are under strict confidentiality rules, not least because they risk prejudicing the results of the election. There are further laws against publishing the information in written form.

We ask you to investigate whether Ms. McCarthy did, indeed, have access to and publish confidential information about postal votes, and whether her agent could have passed her the information.

The letter is with the police.

What Would Kerry Say?

John Cowan is the Labour candidate for Cambridge and

regular contributor
to LabourList. He used to be in the Lib Dems before he was expelled for being a sex pest. He then tried and failed to join the Tories. Labour welcomed in with open arms and even made him candidate: 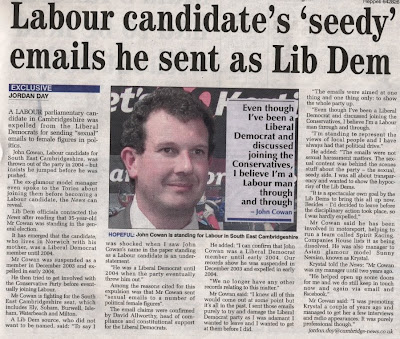 This is strange given it was a complaint from Labour's Kerry McCarthy that got Cowan kicked out of the Lib Dems in the first place. Why then is she now refusing to answer questions about this and apparently happy to see someone who, when a political rival, she objected to, but as a fellow candidate under the red banner apparently fine?

Looks like TB jumped the gun there. Andrew Rawnsley's scathing

put down
of Kerry McCarthy would have qualified for QotD: 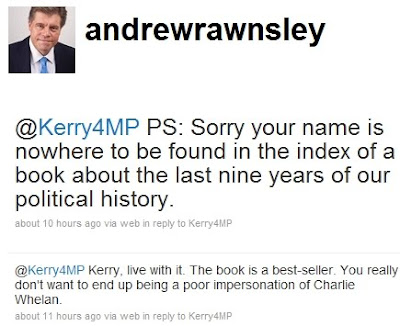 Skip 16 mins into this vid from CPAC for a gem of a speech from YBF's Matthew Richardson:

The crowd reaction to buzzwords is hilarious. As is the fact taking the piss out of Kerry McCarthy has gone global.

She's no Jonah Brown but you can hardly take anything Kerry McCarthy says seriously. Naively she swallowed a line and didn't bother trying to fight for her constituents. 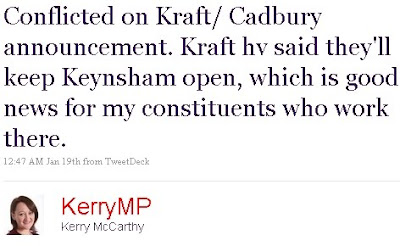 In Reply to a Deluded Public Servant

Due to the fact TB's comment's don't seem to have been approved over at Kerry McCarthy's blog, he thought he would publish his reply to her

mud slinging
. The reply in full:


Twisting the words there much Kerry?

As you will read on Left Foot Forward I clearly explained that Eric Pickles announced that Labour would be fighting a dirty election, as you well know, and therefore there was an important role for rebuttal online.

As for the Sunlight Centre. You're not that special to be the only MP to have a call from someone there today. Given the intense public interest in the expenses saga should it be any surprise that an
anti-corruption group
would query a suspicious sounding use of public money? It would be easier if the company in question clearly explained that they hired out photocopiers.

Thankfully I hear your staff acted in a graceful and professional manner, something you seem to find increasingly difficult.

It was not a media inquiry but part of an on going investigation by an organisation into openness and transparency in the British political system. Something you are your colleagues have held so deeply in disregard for too long.

Sorry if being questioned by a competent female made you feel uncomfortable. Instead of hiding behind cries of sexism you actually had to deal with scrutiny.

Wasn't so hard was it?


UPDATE 19.53: Seems Kerry has engaged. You can follow the ding dong developing
here
.