Talking to a friend who is spending a year in China Tory Bear was asked about how his day had been. When he replied "busy!" and sent her the link to today's fun and games, did it load?

Hell no... seems the esteemed communist internet censors have deemed Tory Bear's musings to be too much for the Chinese audience. He is officially banned...

He would be insulted if it was any other way!

For some reason this went into Tory Bear's spam folder so he's only just seen this years festive prank from CF:

Santa Claus has this year placed Gordon Brown on the naughty list, and thus the Prime Minister will not be receiving any presents. Conservative Future has obtained a

Alistair Darling – for his part in saddling the future generation with huge debt and tax increases.

Michael Martin - for not teaching the Sergeant at Arms that the Police need a warrant before searching a premises/Parliamentary office.

Jacqui Smith - for her bullying students to get an ID card in order to obtain student loans.

Rock said "This story has a serious message at its centre; the politicians who are on the list have performed a grave disservice to young people of this country.The people on this list have eroded democracy, scored cheap political points, recklessly borrowed for electoral gain and, just for good measure, have footed the next generation with a huge bill in a vain attempt to remedy the follies of the last eleven years."

Check out
the game that has appeared where you get to throw shoes at Bush! 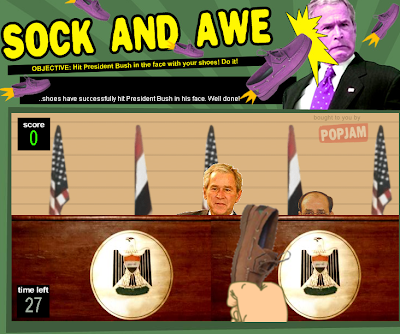 Gordo reading too many comics?

It has come to Tory Bear's attention that Gordon might have taken a lighthearted comic book a little too seriously. Back in June it seems that

The Sun reported
that Gordo had been included in an addition of
Captain Britain
, a comic book. 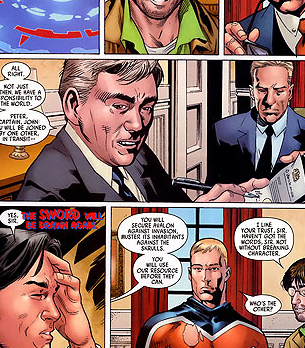 Apparently Gordon saves the world in this particular story and TB can only presume that GB must keep a copy by his bed and has let it all go to his delusional head, culminating in last week's outburst.
Why else would anyone go around declaring they saved the world?
Thanks must got to the closet tory who emailed TB with the link.

Who throws a shoe?

So it seems President Bush was

attacked with shoes
at a press conference in Iraq... surely it wasn't just TB that thought of this:

And even more intriguing check out who owns the site:
Registrant:

Catching up on a few days worth of emails sent to TB. Someone sent in the keenest CFer Tory Bear has probably ever seen: 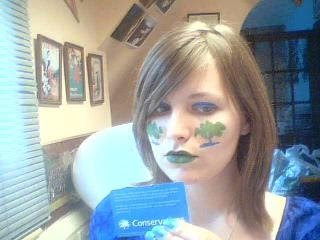 Who is this mysterious painted lady?

Machiavelli
has spotted an interesting wardrobe point about our esteemed Chancellor... 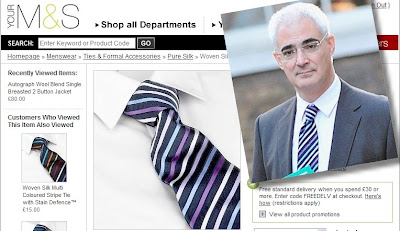 Has he been cashing in on the recession inspired price slashing on the High Street?
Seems so...

Reaction to the BNP membership leak...

Classic stuff once again from the Fuehrerbunker.

ANDY PETERKIN FOR CF CHAIRMAN LAUNCHING HERE IN MID 2010 OR WHEN THE NME HAS THE BALLS TO CALL AN ELECTION*
*Whichever is sooner.

TB can reveal today that Conservative Future's Mr Marmite Andy Peterkin will be running for chairman at the next elections... 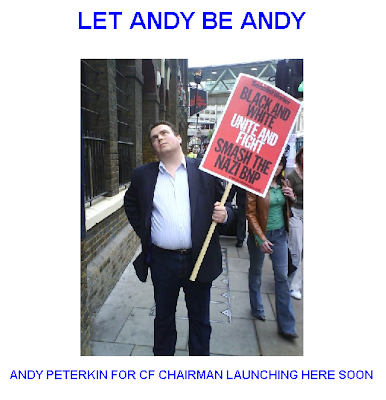 His site
letandybeandy.com
launched overnight. Trying to get in touch with Andy now and will have more on this later.

Update: The perfect dog for Obama

Seems the perfect on message dog is out there for Barack Obama:

Brian Obama has a certain ring to it too... 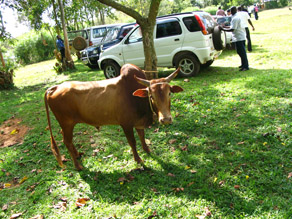 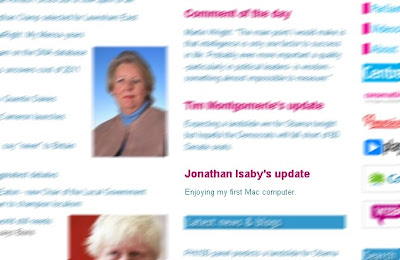 Two days into the new job at
ConservativeHome
and it seems Mr Isaby is already enjoying the perks...

Somewhere in the projects the two campaigns met...

TB strongly recommends you watch this to the very end...who’s gonna be the baddest b-boy in Washington, who’s gonna pop to the top, who’s gonna freeze in the White House and who’s gonna do the worm all the way to Ohio?

So to settle this once and for all, the Grand Old Posse lay it down to the Democrats for a once-and-for-all dance off - winner takes all…

TB would tap that too my friend.

What's Guido up to?

Last week TB did a small call to arms to start sending in video content of what Conservative Future is up to around the country. You can watch the video in the TBtv player on the right. Keep sending TB your stuff...
Exeter CF have sent this video in talking about their recent Sex on the Beach club night that apparently saw over 300 attending. That is damn good for any campus event and the organisers discuss it in the video below...

However TB has just one recommendation... It might be wise to tag the video with some slightly more umm respectable content because at the moment, as you can see below YouTube has jumped to some conclusions: 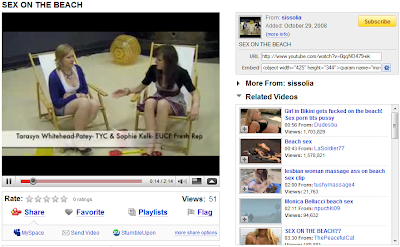 Click to enlarge
This sort of thing has happened before. Joking apart it sounds like the event was a storming success and similar events should be put on across the country. It's nights like this that show just how much of a force CF has become on campuses across the country and no doubt made the branch a hefty bit of cash... 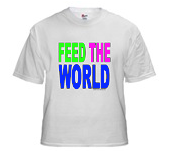 TB understands that Conservative Future will be recording a special version of "Do They Know it's Christmas?" and continuing the style of this year's fresher recruitment material, special t-shirts have been ordered for the fundraising event for the mysterious project.

This is all hush hush of course because apparently no one wants to make it obvious that this is a CF project for fear of putting off members of the Shadow Cabinet from singing on the track. Apparently the whole thing is effectively being distanced from the whole Party, so TB can't really see who is going to come out looking all glossy from this. other than the specific people organising it. It's almost as if they are just in it for personal aggrandisement...

TB is not sure at this point whether Bob Geldof is involved yet.

Look what Tory Bear managed to dig up to brighten up your day...

Truly a piece of Conservative history...