Dave said to ITN today that this was his tenth visit since becoming leader to Scotland and that he is strong fighter for the Union wherever candidates need him etc.

He says it's always hard work for Conservatives in Scotland and he is committed, but how committed is he? While it was good news that we are moving into the third party position in Scotland there is still a hell of a lot more to be done. Scotland represents one tenth of the United Kingdom in terms of population and thus DC should spend one tenth of his time here. Or at the very least a couple of days every month. It's going to be a very sticky situation if the Tories are elected to Westminster with very little representation north of the border.

It's not too late to sort this out...

TB just spotted this on

ConservativeHome.
This postcard is being sent to young voters in Scotland's target seats to raise the awareness of the SNP's continuing implementation of the nanny state. 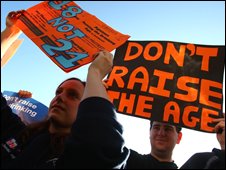 a that the Party in Scotland is getting into gear. Students from all political parties turned out in the morning to rally outside parliament against this measure and they threw their weight behind the Tories. It's amendments and moments like this that show just how powerful the Conservative grouping in Holyrood really is. In a minority government situation, twenty odd votes make all the difference and have a very strong voice.

With the right campaign, the party in the north could really begin to turn things round in the next 18 months. The Scottish seats have some of the youngest and brightest candidates in the country selected. It was a pleasure to meet so many of them at conference and again last night at the excellent dinner put on at Edinburgh's New Club to honour the combined service of over eighty years clocked up by former leader David McLethchie MSP and Edinburgh councillor Alan Jackson. The potential is on the ground and now Scottish Central Office must continue this good start and keep up the momentum.

The election in Scotland must not be fought slagging off the SNP. The election must be fought on the grounds that the only way to get rid of Labour nationally is to vote Conservative. This message must be rammed home, but like this leaflet shows, there is no harm in having a crack at the nats...