Owen Meredith
has been doing some digging around the Liberal Youth recruitment materials that have been published online
here
. He writes:

It was
reported last September
that a long-term Liberal Democrat policy would face the axe after Stephen Williams, Lib Dem Shadow Secretary of State for Innovation, Universities and Skills, said free higher education and scrapping of tuition fees was not sustainable.

In a pre-conference interview with the
Times Higher Education
, Williams said that Nick Clegg, had come to the decision the policy was not viable after "long internal discussions".

The Lid Dem team is slowly but surely backing away from promises on free education, free personal care for the elderly and a raft of other unaffordable pledges a third party can make knowing they will never be in power or have to deliver.

It would seem that Elaine didn't get the memo though: 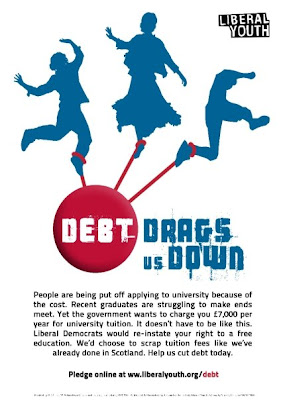 That's right, just recruit students with some lies about what your party stands for. Nice typo at the bottom too. Leaflets have already been sent out.

Sorry TB, but you boobed this time. This is one thing you can't pin on LY, or the generally-hopeless Bagshaw.

The interviews you're quoting are all out of date. They're from the September 2008 party conference. Embarrassingly enough, Clegg did try his damnedest to 'downgrade' the party commitment to free higher education from a promise to an aspiration, just like it says in the article. And he was dong it with Baggers' active help, which is what got so many of us angry.

But he failed. It needed to pass the March 2009 party conference in Harrogate, but the motion was amended to keep the current pledge. The party stands for free higher education, and has done so ever since fees were introduced.

Clegg's views (and Baggers' toadying to them) are a bit of a bummer, though. Still, they're not party policy. The fresher' packs have got it right

And then the policy we reinforced and accepted at the following Spring conference. It is party policy.

If Williams was saying that Last September then perhaps you should keep yourself up to date.

Heres what the parties website has to say on the matter from this March:

"The party has adopted an exciting range of education and childcare policies, including offering free childcare for all children of 18 months upwards, halving infants' class sizes, supporting schools teaching the most disadvantaged children through a pupil premium and delivering free tuition - not just for university students, but those elsewhere in HE and in FE too.

As I understand it; despite what you say here it remains official party policy to proceed with the scrapping of fees. Clegg did make the aspirations comment and may indeed want to change the policy in that direction but that doesn't mean he has succeeded now does it?

So, you are being a little unfair here in all honesty...

When will the Lib Dems stop using the "Shadow" moniker, they have spokespeople on issues. They aren't shadowing ministers because they aren't Her Maj's Loyal Opposition.

Plus they don't have a snowball's chance in hell of being in power any time in the near future.

Looks like the Fib Tories as usual to me.

To should that be Tory Liar, not Bear.

The Voice of Treason said: "And he was dong it with Baggers' active help."

Erm. Nope. I was involved in the internal lobbying to ensure that the policy did not change, as was 'Baggers' and plenty of the rest of us.

To suggest that 'Baggers' was helping Clegg is nonsense. But never mind.

And yes TB, you've missed it here - read policy, and understand how it is made in our party, and realise please that Clegg backed off this one after realising he'd lose.

The idea that Nick Clegg would do anything with Elaine Bagshaw's "active help" is laughable.

Clegg probably doesn't know who she is. If he does know, he definitelydoesn't care.

Getting Liberal Youth on side is considerably less important to the Clegg office than the vague and insane opinions of my mad aunt's second cousin.

BTw, Clegg can over-ride every single decision ever made by any previous Liberal or LD conference at the next one. And if he fails, he can try again at the one after.

I expect him to win in Bournemouth this September.

2. Scrapping our tuition fees policy is not on the cards.

He stated this in July this year, not last September - follow the link in the article.

And the LDY answer to this on Keep Right Online was the LDY policy is not Lib Dem policy... so clearly there is some typical yellow politics going on here - say whatever works, wherever it works, and not worry about it all matching up in the end.

Thats Mark 'sacked for being a rubbish former director of communications' Littewood talking bollocks as usual then...

Bear all is forgiven

"2. Scrapping our tuition fees policy is not on the cards."

Because the Liberal Democrats know the electoral consequences if they scrap it. It would not be good for those Lib Dem MPs that are in seats with significant student populations(Stephen Williams, David Howarth, Greg Mulholland ect.).

Paul?! Where have you reappeared from?

Incidentally I like how the LD polls on your blog actually show us up over a month if you put them in chronological order.

The surprising thing was that Stephen even considered proposing that. Electoral suicide. Of course, not all of us think it's a great idea, but when it's impossible to get students to do anything these days unless you wear red, it's a vote winner.