Game Changer
once tonight already, TB isn't meaning to sound obsessed, but he did happen to clock this little bit of intrigue on the
previously
mentioned
Tom Miller's Twatter feed
: 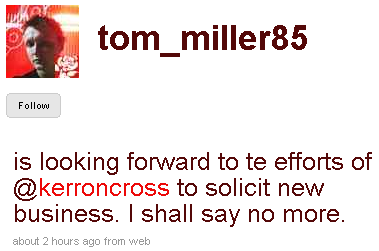 Kerron Cross
has been kicking around for years but has recently given up his blog with
little or no explanation
... the super-blogger and councillor would sure as hell bring a lot more to the company than Miller ever will.

And with that TB is returning to his rosé.

When you read this, as I know you will, that picture on Labour List that you attempted to make out of bounds to any would be down loader...

hey i trademark the twatter name! its on youtube and everything!