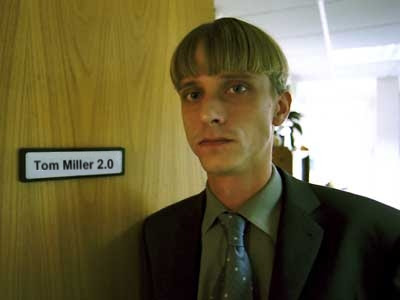 Now TB is aware that it is silly season, but the news that Tom Miller, aka "Mr Smear" aka Gareth, has been selected by the Woking Labour Party to be their candidate really takes the biscuit. If he had a hope in hell of winning then TB would be slightly concerned, but given Miller would have to overturn a
six thousand majority from third place
, it seems Parliament is safe from the greasy pole climbing, bleeding heart joker, for now. No wonder his blog recently disappeared - TB would attempt to hide those quasi-communist rantings that sounded like they came from a stoned fourteen year old in Che t-shirt too.

Frankly after the
interview he gave to LabourList today
, thank goodness this idiot won't be anywhere near power anytime soon. Where to begin?

Miller has taken to the classic Labour backstabbing and bitchiness like a duck to water. In his new role as a PPC he has already called for Purnell and Hazel Blears to be forced out of Parliament (
10:47 am comment
) but then what would you expect? Miller has previous trouble making experience. Lets not forget that Miller was embroiled, at a high level, in what was one of the biggest political scandals of the last twenty years. He was henchman to Derek Draper and has admitted to doing Draper's dirty work, including compiling smear documents and attack memos. When the McBride email scandal forced Draper to surrender the reigns of LabourList, Miller went too, but not without a pay off for his silence. Is this really something that the people of Woking would want in their elected Member of Parliament? Miller could have used his interview with LabourList to atone for his disgusting past behaviour, but instead he decided to treat the whole thing as a joke, claiming: "Good to see that you've managed to run it [LabourList] and rebuild it without receiving any potentially libelous emails. It shouldn't be that difficult really!" This sort of attitude shows that Miller and co just still don't get it. Attempting to deflect the seriousness of the McBride scandal by batting it away with piss poor humour shows just what an amateur and naive young man Miller is - way out of his depth and totally unsuitable to be a candidate.

As one fellow Labour PPC put it when he sent TB the link this morning - "What a wanker."

But it's not as if that is it. The interview is full of other gems. As Dizzy has
pointed out earlier
:

"I've just read quite possibly the funniest thing ever on Labourlist. Tom Miller, the new Labour PPC for Woking has written some of the things he believes in, including this gem (emphasis mine),

"I believe in balanced budgets, but I think the best way to do that is to make sure we come out of recession without having completely devastated our potential to recover. Increased investment and borrowing is needed, because it's a slow rise we need."

Got to love the contradiction there, he believes in balanced budgets and thinks increasing borrowing and spending, sorry "investment", is the way to achieve it?

That's a bit like saying "I believe in vegetarianism, now please pass me a hamburger"."

And where next? How about this charming quote:

"I appreciate that I am (very) young, but the commons is full of rose-cheeked guffawing old men, and few of them know how to make a slippery nipple, or what it feels like to shower stale fag ash out of your hair... Why don't we have any young parliamentarians?"

Well Tom, if you believe that stinking of fags and being able to mix shots qualifies you to be an elected representative of the people then you have probably just answered your own question. Is this kid for real? In one sentence he has probably, single handed, put the case for younger representation in parliament back ten paces. Being able to mix shots (and clearly not hold them if you end up with your head in the ashtray,) is hardly top of the list for qualifications for young parliamentarians. TB doubts Pitt the Younger used the slippery nipple line when arguing why his elders should take him seriously. Did Tom use this line in front of his selection panel?

What next? Well lets have a look at young Gareth's CV shall we? As TB mentioned previously, Miller was one of the henchman at the time of the Draper/McBride scandal. What he fails to mention though is the sympathy job he got with the New Labourish Game Changer PR after he was fired from LabourList. Miller is some sort of
"consultant" with Game Changer
(he is apparently in the Slippery Nipple and Fag Ash Brand Development Department.) Why does he leave this fact out of the interview? Why is he hiding where he works? What's wrong with working in PR?

Like all good rants TB will end with a quote. No TB won't be naff and quote a Kennedy like Miller, but instead will leave this gem from the man himself to gnaw at the back of your head.

"as a socialist, power is in itself an important part of my principles" (10:39 am comment)

Everything else aside, there is the chilling proof that this man should be kept as far away from any semblance of power as possible. There is a glimpse into his inner lefty frame of mind, and it's not a nice view.

"as a socialist, power is in itself an important part of my principle"
FFFFFF. This man/boy really is a twunt.

That would be pole-climbing, rather than "poll-climbing". I don't think Tom Miller will be climbing any polls any time soon! (It'll be fun actually to see how far he falls down the Woking poll when the time comes.)

Every time I come across this moron he's putting his Socialist foot in it. Perhaps it's a cry of solidarity to his incompetent "Leader".

I agree TB. I absolutely dispise PPC's under the age of 30. They are all party hacks who will drive this country into the ground with their shameless careerism. He has bugger all experience in the real world or doing serious work in business or proper management, he isnt qualified to represent anyone. Im 20 and I wouldn't want a young person talking about representing the young or some rubbish like that. If your under 30 and a PPC you are as far away from your peers in terms of representing them you might as well be 60. Hope he gets thrashed and he remains unelected for the rest of his life, no young PPC's are electable as they have thrown away their self-respect and indepedence by submitting to the part machine.
PS-this refers to all young ppc's regardless of party

Just read that jumped up little shit's CV on LabourList. Unbelievable. Oh, and no mention of the fact he was in it up to his neck with Damian McBride during Smeargate.

What a fucking tosser.

If this is the standard of candidate that Labour are putting forward for the next election then their certain landslide loss will surely turn into an annihilating tsunami.

Btw, has that little prick even left school yet?

"as a socialist, power is in itself an important part of my principle"

Probably the only thing Blair and Bevan both agree...

'You should all know that Derek Draper subsists almost entirely on doughnuts. Eat enough of them and you're sure to pull someone from GMTV!'

how did you miss that one tb?

Tom Miller is running as PPC for Woking where I live and has been up to his old tricks again on his Facebook page and his smarmy vide on the South East Candidates web page.

Not capable of talking about policy and what he will do for the people of Woking, he instead starts his video attacking the Conservatives and then the Lib Dems.

My response to the little pillock is here https://spiderplant88.wordpress.com/2010/03/19/tom-miller-the-face-of-new-old-labour-in-woking/