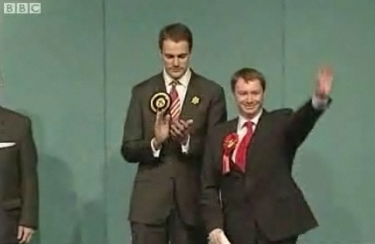 The Tories were never going to win this one, but an interesting set of results. The BNP do well in places where Labour have abandoned their working class core. (see 2009 European Elections, The.) Glasgow is another prime example of this. Both the BNP and SNP were standing noticeably to the left of Labour. Disenfranchised and angry voters had two clear left-wing nationalist choices in this by-election, but it seems an alarming number of those who bothered to protest vote were less willing to vote SNP over their more extremist cousins. This is not good.

The BBC are being blamed, slightly unfairly, for all this BNP on the rise hoohaa. Apparently it's all on the back of their legally binding decision to have the BNP on Question Time. The only people to blame, however, are the ones that gave that decision such ridiculous levels of coverage. He should have been on, and the hysterical reaction to it was the real outrage. The result of that oxygen of publicity given to the lunatic Griffin was seen last night. A lesson to be learnt there.

The smug reaction of Labour last night was pathetic. The disgustingly on message drone candidate couldn't hide his lying eyes as he spouted the "people have put their faith in Gordon Brown" mumbo jumbo. If they couldn't even hold this seat then they wouldn't have a single seat left in the country. This is Labour heartland - trade unionists and unemployed teeters. These people don't want change, they get cash handed to them on a plate with Labour. Willie Bain, probably the only MP to still live with his mum and dad age 36, said it was a ringing endorsement for Gordon Brown. What absolute twaddle. Why then was his face not put on a single leaflet?

This is no comeback for Brown or Labour, if they can't keep the voters they bribe with benefits and handouts then they are in even more trouble than anyone thought. Beyond the spin this should have been a walk in the park for them, but instead they had to throw the negative kitchen sink at their nationalist rival to defend one of their safest seats in the UK. Also errh... what happened to the Lib Dems? They were briefing that they had beaten the Tories all evening... sixth. Nice! Seriously, what is the point lads?

So Labour live to fight another day, poor night for the SNP, scarily good result for the BNP, shocking night for the Lib Dems. Pretty much what was expected for the Tories, up slightly which was nice but hey, tough crowd.

P.S. This cock up from the BBC did make TB chuckle: 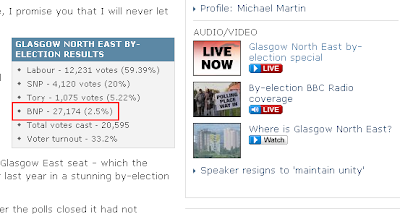 The postal voting on this one should be looked at.

Over 1000 people registered for a postal vote in the last three days of campaigning...I smell a great big zanu labour rat.

a hidden story
behind these results.

One that proves a long-held hypothesis about Labour voters . . .

Crikey, no wonder they were so confident!

your figures of turn out need a marker to mean anything. What was the turnout last time for that seat? I bet it wasn't much higher than 33%. So i think your point may be inadvertantly misleading. Or perhaps you are 'spinning' the result based on low turnout?

At Heriot Watt we actually found any sympathy towards the BNP mainly came from Tory supporters.

On the result..It was nothing more than a protest vote against a possible Tory government.

The SNP are well ahead of Labour for Holyrood so this result is no reflection on them.

The Tory party just came in 3rd, a total disgrace for a party craving power.

So 82% of the population didn't vote Labour.

I'll drink to that

Kim jong il:
"What was the turnout last time for that seat? I bet it wasn't much higher than 33%."

"So i think your point may be inadvertantly misleading. Or perhaps you are 'spinning' the result based on low turnout?"

Vote share for Labour increased in 2009, decreased for SNP. No Tory candidate in 2005.

Police have been called in to check some voting papers.

Turnout fell by 12.5% and that was from a seeker seeking re-election!

This seat (and its predecessor, Glasgow Springburn) regularly got turnout close or even above 50% and a Labour result of up to 73%.

Really is a poor show for Labour and their Master look alike new MP.

"As the commentators put it on the BBC coverage last night, the place of Glasgow North East is so hopeless in some quarters and so lacking in any kind of optimism that they cling to what they know, particularly the older generations"
...

First of all, I could show you a half a dozen leaflets that featured pictures of Willie and Gordon Brown. Maybe if you Tories had actually given a flying fuck about Glasgow then you might have come up and campaigned.

Secondly, you can't have it both ways. You say that the low turnout demonstrates that this is a very worrying result for Labour, yet it was a scarily good result for the BNP. Surely such a result would only be worrying if the turnout was high. Which is it TB???

I'm not going to pretend that Labour aren't in dire straits nationally but having campaigned in this by-election for nigh on five months one thing came has come across loud and clear - the people of Glasgow have longer memories than the rest of the country. Maybe that's because they were screwed over worst by the Tories last time.

Be glad, the one eyed jock will remain to "lead" nulab into the election.

We have them where we want them

Not sure if I agree with your analysis of the Question Time/Griffin impact on BNP votes, TB.

In the Euro elections in May the Tories and BNP polled roughly 550 votes each, but UKIP managed over 600.

UKIP didn't stand in the by-election, so if it's assumed most of its May votes were split between the Tories and BNP, and adjusting for the 50% increase in turnover (it was 21.6% in May!!) then 1,000 votes or so each for the Tories and BNP seems plausible without any Question Time fillip.